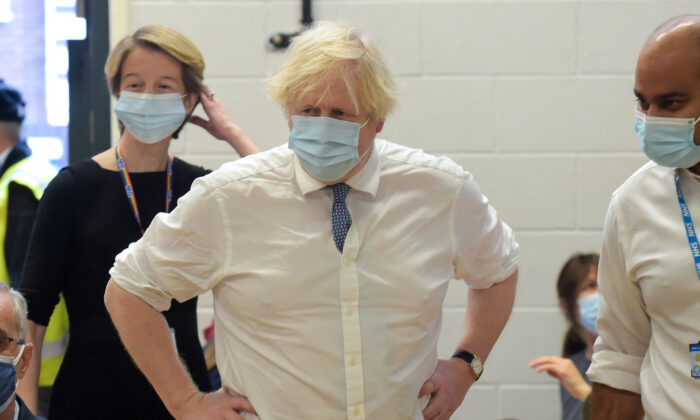 UK Prime Minister Boris Johnson said on Dec. 13 that at least one patient has been confirmed to have died with the Omicron variant of the CCP (Chinese Communist Party) virus, which causes the disease COVID-19.

Speaking during a visit to a vaccination clinic in West London, Johnson said the Omicron variant “is producing hospitalizations” and “sadly, at least one patient has been confirmed to have died with Omicron.”

The UK Health Security Agency confirmed that 10 people in the UK have been hospitalized with the Omicron variant and that the majority had received two doses of a COVID-19 vaccine.

Details regarding the age and health condition of the patients weren’t released to the public.

Johnson said that Omicron now represents about 40 percent of COVID-19 cases in London and that “tomorrow it’ll be the majority of the cases” in the country’s capital.

The UK government has adopted a series of measures, known as “Plan B,” to slow the spread of the new variant, which was first detected in South Africa.

On Dec. 10, the government began enforcing a mask mandate in most indoor settings in the UK including cinemas, theatres, and churches. People have also been asked to work from home if they’re able to do so, and vaccine passports will be introduced for large-scale events and nightclubs beginning on Dec. 15.

The new regulations will be put to a debate and vote in the House of Commons on Dec. 14. With support from the main opposition Labour Party, the measures are certain to be approved, despite the prospect of a large rebellion by Conservative backbench MPs.

Johnson said MPs that are thinking of rebelling against Plan B measures need to recognize that there’s “no room for complacency” in dealing with Omicron, as it “is a very serious risk to public health, and that it’s spreading very fast.”

He insisted that the measures are “balanced and proportionate.”

Johnson repeatedly declined to rule out further COVID-19 restrictions being introduced ahead of the Christmas holiday, as he said the goal is to “offer a booster” to every adult by the end of 2021.

“We think the steps that we are taking—so Plan B, combined with a hugely ambitious acceleration of the booster campaign, bringing it forward by a month so we offer a booster to every adult by the end of the year—we think that’s the right approach.”

Earlier on Dec. 13, Health Secretary Sajid Javid told Sky News that there were 10 people in hospital in the UK with the Omicron variant.

He told the BBC that the government will “throw everything at” the booster vaccine programme to tackle the variant.