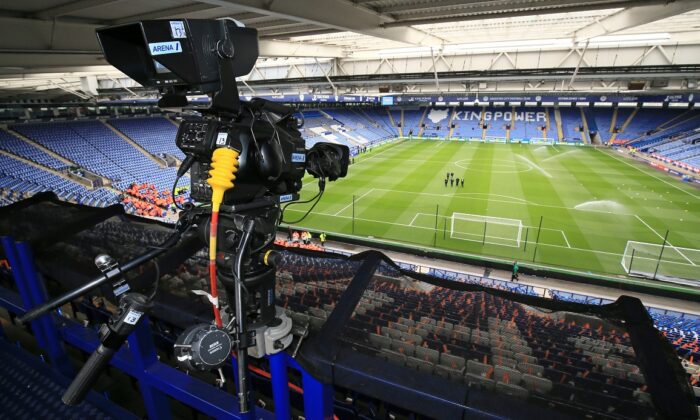 A TV camera sits, waiting for a Premier League match at the King Power Stadium in Leicester on May 2, 2015. (Nigel French/PA)
Media & Big Tech

Britain’s Competition and Markets Authority (CMA) has launched an investigation into several sports broadcasters and said it had “reasonable grounds” to believe BT, ITV, Sky, and IMG Media might have broken the rules on competition.

In a statement on its website the CMA—which keeps an eye on markets to prevent monopolies or cartels keeping prices artificially high or running other uncompetitive practices—said, “The investigation relates to the purchase by such companies of freelance services which support the production and broadcasting of sports content in the UK.”

It added, “At this stage the CMA believes it has reasonable grounds to suspect one or more breaches of competition law.”

The companies are being investigated under Section 25 of the Competition Act, which covers the running of cartels.

The CMA said it “has not reached a view as to whether there is sufficient evidence of an infringement of competition law for it to issue a statement of objections to any party or parties.”

The English Premier League—which was won by Manchester City last season—was launched in 1992 and there is a voracious global appetite for live games from Africa, Asia, and the Middle East in particular.

In May 2021 the Premier League concluded a three-year deal worth £4.8 billion ($5.7 billion) from 2022 to 2025 to allow live games in the UK to be shown on Sky Sports, BT Sport, and Amazon Prime Video, with BBC Sport getting the highlights.

IMG was given the rights to show English Premier League games in Central and Eastern Europe and also on ships and planes globally.

ITV, in a statement to shareholders, said it “notes the announcement today by the UK Competition and Markets Authority that it has opened an investigation into the purchase of freelance services, which support the production and broadcasting of sports content, in the United Kingdom by ITV and other named companies in the sector.”

It added: “ITV is committed to complying with competition law and is cooperating with the CMA’s inquiries. ITV does not propose to comment on this investigation further at this stage.”

A Sky spokesman told PA, “We are cooperating fully with the CMA.”

BT and IMG Media have not yet issued statements.