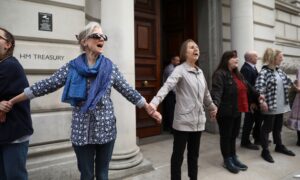 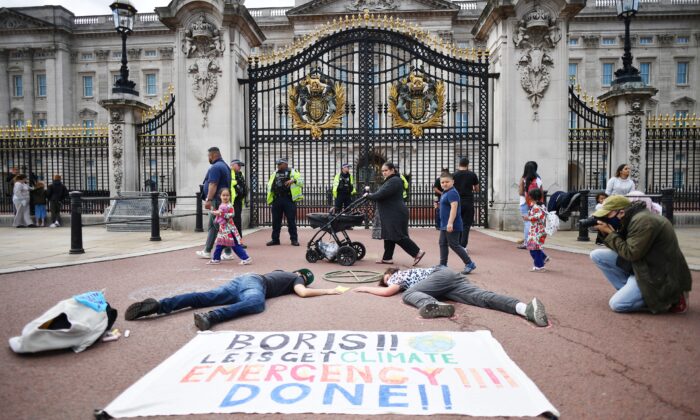 A family walk past as activists take part in a demonstration outside Buckingham Palace, as part of protests by the Extinction Rebellion climate change group on the fifth day of their new series of 'mass rebellions', in central London, on Sept. 5, 2020. (Justin Tallis/AFP via Getty Images)
UK

The British government’s commitment to achieving “net zero” greenhouse gas emissions by 2050 is a “colossal challenge” that could cost hundreds of billions of pounds, a public spending watchdog has warned.

The government will need to spearhead “a concerted national effort” that will require changes to how buildings are heated, how people travel, and how much meat they eat, the UK’s National Audit Office (NAO) said in a report (pdf) published on Friday.

In June 2019, the UK government passed legislation committing itself to achieving net zero emissions by 2050, in order to deliver on the commitments under the Paris Agreement in 2016.

Prime Minister Boris Johnson said at the United Nations Climate Roundtable in September that the British government will “lead by example” in the run-up to the 26th U.N. Climate Change Conference of the Parties (COP26), which the UK government will host in Glasgow in November 2021.

But the desired leadership role comes at a cost, as the NAO report made clear.

“Achieving net zero is a colossal challenge and significantly more challenging than government’s previous target to reduce emissions by 80 percent by 2050,” the report stated.

The public spending watchdog said that the costs of fulfilling the government’s climate pledge are “highly uncertain,” but said the figure is likely to be hundreds of billions of pounds between now and 2050.

The NAO estimated that the government has committed about £20 billion ($27 billion) to policies related to the net zero target in the past four years.

According to estimates by the UK’s Climate Change Committee in 2019, the annual costs of achieving net zero could increase over time and reach around 1 to 2 percent of GDP in 2050.

The NAO report also highlighted the need to persuade individuals to change their behaviour and lifestyles.

“Achieving net zero will depend on individuals adopting new technologies, changing their habits and lifestyles, or a combination of both,” it stated.

The government has already stepped up its effort to encourage behaviour change among the British public.

In April 2020, the Department for Business, Energy, and Industrial Strategy (BEIS) set up a “behaviour change and public engagement team,” which has established cross-government working groups covering themes such as decarbonising homes, mobility, and diet.

But even some of those who campaign for climate actions have so far failed to adopt more climate-friendly behaviours.

A study published in October found that climate scientists take “significantly” more flights—an activity they believe contributes to global warming—than any other researchers.