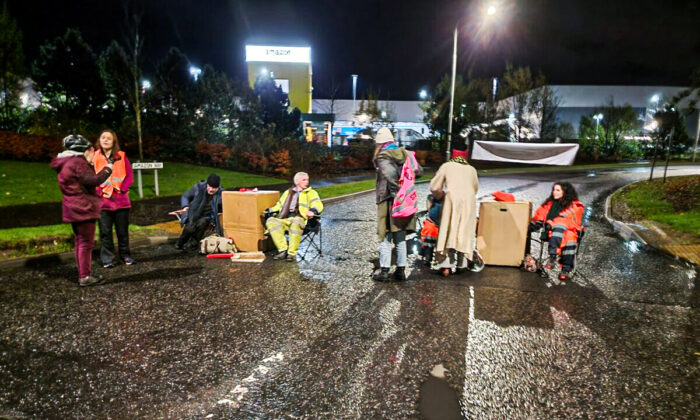 Amazon’s largest UK warehouse is being blockaded by climate activists targeting the global retail giant’s busiest day of the year.

Extinction Rebellion’s Black Friday demonstration, with about 20 activists, started at 4am at the distribution centre in Dunfermline, Fife.

Protesters with “lock-ons” and placards have stopped lorries entering the Scottish site and some from leaving.

XR’s spokesperson at the Dunfermline blockade, Meg Paton-Jones, said: “The police have one van on site and they are watching us.

“We started here at about 4am but are not blocking the employees’ car park so the night shift can leave.

An XR spokesperson added: “The action is intended to draw attention to Amazon’s exploitative and environmentally destructive business practices, disregard for workers’ rights in the name of company profits, as well as the wastefulness of Black Friday.

“The blockade is part of an international action by XR targeting 15 Amazon fulfilment centres in the UK, US, Germany and the Netherlands, aimed at highlighting Amazon’s ‘crimes’.

“This is happening in solidarity with activists and workers from the global Make Amazon Pay campaign, demanding better working conditions, clear environmental commitments, and for Amazon to pay their fair share of tax.

“Amazon continues to lobby the US government to fight against climate legislation while telling the public they are committed to green initiatives.

“They are committing the very definition of greenwash.”

The UK group has close associations with anti-capitalist ideologies and movements and on its website calls for “a rapid change in wealth distribution and power structures, preventing a rich elite from perpetuating a self-serving ideology.”

An Amazon spokesperson said: “At Amazon, we take our responsibilities very seriously.

“That includes our commitment to be net-zero carbon by 2040—10 years ahead of the Paris Agreement—providing excellent pay and benefits in a safe and modern work environment, and supporting the tens of thousands of British small businesses who sell on our store.

“We know there is always more to do, and we’ll continue to invent and invest on behalf of our employees, customers, small businesses and communities in the UK.