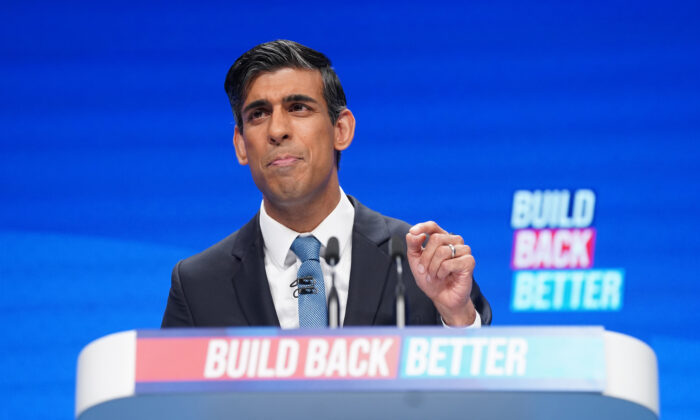 Chancellor of the Exchequer Rishi Sunak speaking at the Conservative Party Conference in Manchester, England, on Oct. 4, 2021. (Stefan Rousseau/PA)
UK

Chancellor of the Exchequer Rishi Sunak refrained from ruling out future tax rises on Monday as ministers face pressure from their own party to put a lid on taxes.

After Prime Minister Boris Johnson declined to rule out tax rises in the upcoming budget last week, senior Conservative Party members have warned the government that the size of the tax burden is becoming “unreasonable” and it’s hurting the Tories’ credibility as a low-tax party.

Speaking at the Conservative Party Conference on Monday, Sunak did little to dispel the prospect of further tax rises as he highlighted the need to put public finances on a sustainable footing.

The finance minister said a prosperous future has to be built on strong public finances, which doesn’t “happen by accident.”

“I have to be blunt with you. Our recovery comes with a cost,” he said, adding that the UK’s national debt is at almost 100 percent of its GDP.

“Whilst I know tax rises are unpopular, some will even say un-Conservative, I’ll tell you what is un-Conservative: unfunded pledges, reckless borrowing, and soaring debt,” Sunak told the conference, stressing that the UK can’t keep borrowing and expect the financial situation to “simply sort itself out.”

“Yes, I want tax cuts. But in order to do that, our public finances must be put back on a sustainable footing,” he concluded.

Speaking to broadcasters in a round of media interviews earlier, Sunak defended the government’s massive spending spree during the CCP (Chinese Communist Party) virus pandemic, saying the country “suffered the biggest economic shock in 300 years.”

Sunak said despite the economic impact of the pandemic, the government still wants to deliver its commitments—”whether it’s on the NHS, whether it’s more police officers, whether it’s levelling up around the country.”

“We want to make sure we can deliver on those, which is why we’ve taken these decisions, but we’ve been upfront with people about it and why we’re doing it, doing it in what I believe to be a fair way,” he told LBC radio.

Sunak declined to rule out either a tax rise or a tax cut before the next election, saying he couldn’t “speculate about future budgets.”

Johnson’s government is under pressure over household budgets, which will be hit by increasing energy bills and a cut to Universal Credit while many prices in the shops are going up.

Family finances are set to take a further hit from next April when National Insurance contributions rise by 1.25 percent to pay for the government’s investment in the NHS and social care.

In a passing reference to the current crisis, Sunak said that “tackling the cost of living isn’t just a political soundbite, it’s one of the central missions of this Conservative government.”

Jacob Rees-Mogg, leader of the House of Commons and lord president of the council, said on Sunday that he doesn’t believe a tax rise will be productive.

“We are at the upper reaches of the reasonableness of the tax burden,” the Cabinet minister said at an event hosted by the TaxPayers’ Alliance pressure group.

“Even when tax rates have been considerably higher, the tax take has not been much higher,” he added.

The Conservative MP said he believed the UK is “about at the limit of what taxation can raise.”

Asked if that was an argument for lower taxes, he responded, “That’s a very strong argument but it’s all about balance.”

Sir Graham Brady, Conservative MP and chair of the 1922 Committee, said the party needs to be “critically aware of” the rising living cost as it becomes “very important concerns.”

The top Tory backbencher also warned against pre-election wheezes following reports the prime minister had reached a deal with the chancellor to cut taxes before the next election in return for balancing the books now.

“If we want to go into the next general election with a credible reputation as the party that believes in the lowest taxes that can possibly be achieved in the circumstances, then we can’t, to quote Lynton Crosby, you can’t fatten a cow or a pig on market day,” he told his Tory colleagues at the party conference.

The prime minister on Sunday defended his government’s record on the public finances, saying Margaret Thatcher would have backed his approach.

“We have had to look after the British people with £407 billion [$554 billion] of protection for their jobs, for people’s livelihoods,” Johnson told the BBC’s “The Andrew Marr Show” on Sunday.

Asked to rule out further tax hikes, Johnson said there’s “no fiercer and more zealous opponent of unnecessary tax rises” than him, but his government had “had to deal with a pandemic on a scale which this country has not seen before in our lifetimes and long before.”

Johnson said neither he nor Sunak would want to raise taxes if they can “possibly avoid it.”

“Margaret Thatcher would not have borrowed more money now, I’ll tell you that much for free,” he added.