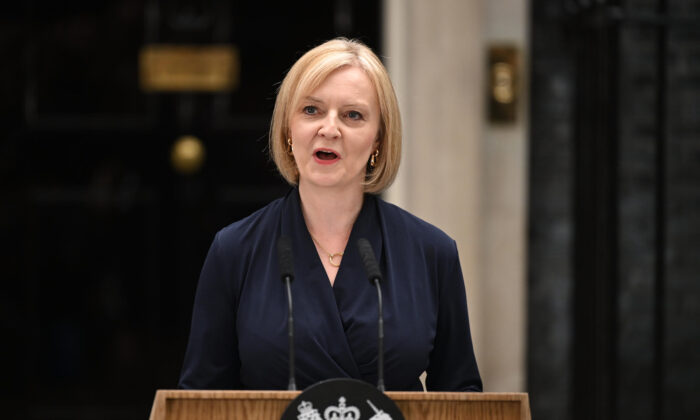 UK Can ‘Ride out the Storm,’ Liz Truss Says in First Speech as Prime Minister

Britain’s new Prime Minister Liz Truss has said she is confident that the UK will “ride out the storm” as she prepares to tackle the soaring energy costs and other economic challenges facing the country.

Truss became the UK’s third female prime minister on Sept. 6 after an audience with Queen Elizabeth at Balmoral Castle in Scotland.

Her new government will be facing mounting challenges, with rising energy bills, train strikes, and both a winter crisis in hospitals and a recession looming, not to mention the ongoing conflict in Ukraine.

Speaking in Downing Street in her first speech as prime minister, Truss acknowledged the economic headwinds facing the country but promised action this week to help with energy bills.

She said: “I’m confident that together we can ride out the storm, we can rebuild our economy and we can become the modern brilliant Britain that I know we can be. This is our vital mission to ensure opportunity and prosperity for all people and future generations. I’m determined to deliver.”

Truss vowed to “transform Britain into an aspiration nation with high paying jobs, safe streets, and where everyone everywhere has the opportunities they deserve.”

She promised to “get Britain working again” through a “bold plan” to grow the economy, which includes cutting taxes to “reward hard work and boost business-led growth and investment.”

In an acknowledgement of the immediate problem facing households across the country, Truss said: “I will take action this week to deal with energy bills and to secure our future energy supply.”

She also pledged to put the National Health Service (NHS) “on a firm footing” so that “people can get doctor’s appointments and the NHS services they need.”

Truss paid tribute to her predecessor Boris Johnson, who she said, “delivered Brexit, the COVID vaccine, and stood up to Russian aggression.”

“History will see him as a hugely consequential prime minister,” she added.

Earlier, Johnson said in his farewell speech in Downing Street that he will be offering Truss’s administration “nothing but the most fervent support.”

He called on members of the Conservative Party to “get behind Liz Truss and her team and her programme and deliver for the people of this country.”

He wrote: “I look forward to deepening the special relationship between our countries and working in close cooperation on global challenges, including continued support for Ukraine as it defends itself against Russian aggression.”

The White House confirmed that Biden will speak to Truss on Tuesday evening.