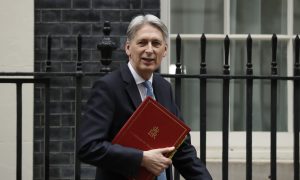 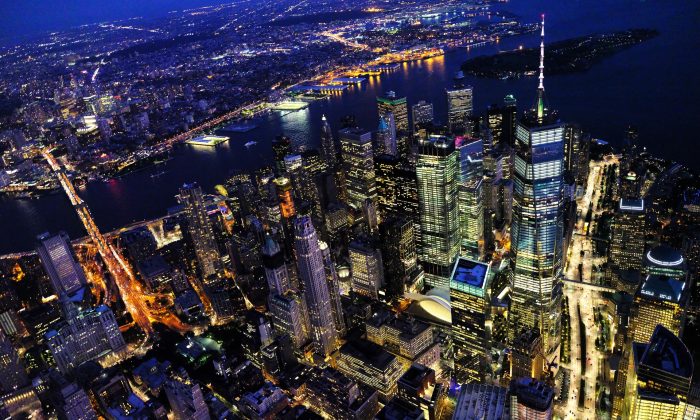 An aerial shot of downtown Manhattan at night. (Pixabay)
UK

The UK government has bought a $15.9 million luxury penthouse apartment in New York for a British senior diplomat to use while he works to secure post-Brexit trade deals.

Thanks to @AshWebsterFBN for inviting me to join him on @fbncountdown @FoxBusiness to talk about #Brexit and 🇬🇧🇺🇸trade opportunities! pic.twitter.com/KUjQutpMgc

The purchase of the apartment, which takes up the entire 38th-floor of the 44-story 50 United Nations Plaza, was overseen by the UK’s foreign secretary Jeremy Hunt.

The luxury tower, which is located near the U.N. headquarters in Manhattan, is described by its architectural firm as “the ultimate global address” with “infinite city views” and was designed by award-winning British firm Foster and Partners.

A floor plan of the apartment shows it boasts five large ensuite bedrooms, two “staff bedrooms,” three walk-in-closets and a 73.6 foot by 21.3 foot living area, which includes a library, dining room and a living room.

The kitchen comes equipped with a “speed oven,” a double oven, a wine cooler, an ice maker, and two dishwashers.

The penthouse was reportedly purchased for $15.9 million on March 15 by “Her Britannic Majesty’s Secretary of State for Foreign and Commonwealth Affairs,” according to New York City records.

The high-rise apartment was purchased from the tower’s developer— the Zeckendorf family and Eyal Ofer, an Israeli real estate tycoon based in Monaco who is estimated to have a personal fortune worth $10.5 billion.

A Foreign Office spokesman said the luxury property “will help promote the UK in the commercial capital of our largest export market for years to come,” adding that it had “secured the best possible deal.”

“As well as being the consul general’s residence, it will also be used to support his work to help British businesses as Her Majesty’s Trade Commissioner for North America.

“We are in the process of selling the consul general’s current residence.”

The 182-yard-high tower, which has “panoramic views of the East River and an uninterrupted Manhattan skyline,” also housed the former U.S. ambassador to the U.N., Nikki Haley, until December last year.

The “shimmering modern” tower block promises its residents “an extraordinary level of privacy, security, and serenity” along with “the opportunity to live in one of the world’s most prestigious locations.”

The block features a large swimming pool lined with black marble, a fitness center, and a residents-only valet system, its website reads.

“Adding a touch of elegance to every detail, the powder room walls are fitted with glazed silk panels in a choice of either bold primary or natural colours.

“A spa in the basement incorporates a large exercise pool for residents,” it continues.

The purchase has been met with some criticism in the UK as an example of excess spending at a time of political upheaval in the wake of Brexit.

China Seeks to Subvert Europe Through Divide and Conquer Strategy

“Yet another example of the ridiculousness of Brexit,” Christoper Phillips, a professor of international relations at Queen Mary University of London, wrote on Twitter.

“The UK has had to sell off many of its grander foreign properties to balance the books during austerity; and now splashes out on this penthouse to win previously unnecessary trade deals.”

Yet another example of the ridiculousness of Brexit. The UK has had to sell off many of its grander foreign properties to balance the books during austerity; and now splashes out on this penthouse to win previously unnecessary trade deals. 🙄 https://t.co/uVyXpDJMx6