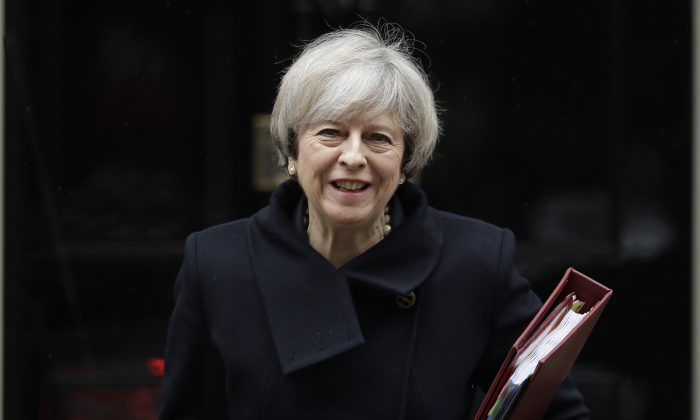 British Prime Minister Theresa May gets in a car as she leaves 10 Downing Street in London, to attend Prime Minister's Questions at the Houses of Parliament on Feb. 1, 2017. (AP Photo/Matt Dunham)
International

LONDON—Britain is leaving the European Union’s single market but wants a “frictionless” new trade relationship with the bloc, the government said Thursday in the most detailed account yet of its EU exit plans.

In a bid to ease uncertainty around the U.K.’s exit from the European Union—and appease opposition demands for greater clarity—the government published a White Paper outlining “strategic aims” in divorce talks it plans to trigger within weeks.

Brexit Secretary David Davis told lawmakers that Britain would work toward “a new positive and constructive partnership” with the bloc and seek an outcome of “mutual benefit” to both sides.

The 75-page document confirms what Prime Minister Theresa May announced in a speech last month: Britain will leave the EU’s single market in goods and services, and also seek a new customs arrangement with the soon-to-be 27-nation bloc.

Davis said the goal is “the most free and frictionless trade in goods and services as possible.”

The word “frictionless” appears frequently as Britain’s ideal relationship, but the document does not go into detail, noting that the eventual trade and customs relationships will be hammered out during negotiations.

And there’s no word on Britain’s future immigration rules. “We are considering very carefully the options that are open to us,” the paper says.

The document says Britain intends to guarantee that almost 3 million EU citizens living in the U.K.—and 1 million Britons who reside in other member states—can stay, blaming an unnamed minority of EU nations for obstructing a deal so far.

Although the tone is upbeat—stressing Britons will remain “reliable partners, willing allies and close friends”—the document gives a sense of the vast scale of the task ahead.

The paper says Britain will seek “the closest possible cooperation on key issues like security, foreign policy and science and technology” with the EU, but cannot say whether the U.K. will remain a member of the EU police body, Europol.

It lists a raft of EU bodies, regulating vital aspects of business and society, whose relationship with Britain will have to be hammered out. They include the European Aviation Safety Agency, the European Food Safety Authority and the nuclear energy regulator Euratom.

On Wednesday, the House of Commons gave initial approval to a bill authorizing Prime Minister Theresa May to trigger exit talks. She plans to do that by March 31, invoking Article 50 of the EU’s key treaty and setting the clock ticking on a two-year deadline for a deal.

The White Paper says Britain is confident of striking a deal by the deadline—but that many of the changes may have to be phased in gradually to avoid a “disruptive cliff-edge.”

Opposition parties were unsatisfied with the amount of detail in the paper.