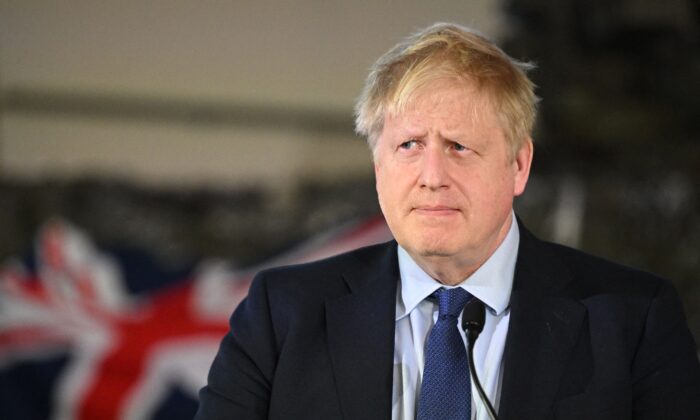 British Prime Minister Boris Johnson speaks during a joint press conference with Prime Minister of Estonia and Secretary General of NATO at the Tapa Army Base in Tallinn, Estonia, on March 1, 2022. (Leon Neal / Pool/AFP via Getty Images)
UK

The UK is “bolstering” its package of sanctions against the Kremlin with “new powers in our arsenal to go further and faster”, UK Prime Minister Boris Johnson has said.

Johnson said the changes will “ramp up the pressure on those criminal elites trying to launder money on UK soil”, ensuring they have “nowhere to hide”.

It comes as the government has been under pressure to speed up punitive action against people linked to Russian President Vladimir Putin’s regime.

The amendments to the Economic Crime (Transparency and Enforcement) Bill being put forward by the government will “help streamline the current legislation so we can respond even more swiftly and effectively to the current crisis in the way we sanction individuals”, the Foreign Office said.

The FCDO said the provisions will allow the UK to align more rapidly with the individual designations imposed by allies such as the U.S., Canada, and the EU.

This will be achieved via an “urgent designation procedure”.

The changes also include shortening the length of time foreign owners of UK property will be given to declare their true identity as part of a new register of overseas entities, from 18 months to six months.

As set out in the existing legislation, other sanctions will include prison sentences of up to five years.

Another change will commit the government to publishing an annual report on the use of Unexplained Wealth Orders (UWOs).

Data on the use of UWOs is already published in the annual Asset Recovery Statistical Bulletin, but the additional report will be laid before Parliament and provide further information beyond how many UWOs have been obtained and their estimated value, the FCDO said.

Johnson said the UK has “led the way” with its package of sanctions against Putin’s regime, and is now “bolstering” this with “new powers in our arsenal to go further and faster”.

“We will ramp up the pressure on those criminal elites trying to launder money on UK soil and close the net on corruption,” he said, adding: “They will have nowhere to hide.”

Foreign Secretary Liz Truss said the changes will “allow us to go faster and harder on those closest to Putin, including oligarchs”.

“Our message to Putin and his cronies has been clear from day one—invading Ukraine would have serious and crippling consequences,” she said.

“We have been true to our word, introducing the largest and strongest sanctions package in our history, but we are not stopping here.

“The changes we are making will allow us to go faster and harder on those closest to Putin, including oligarchs, as we continue to ratchet pressure in the face of illegal and unprovoked Russian aggression.”

The amendments follow calls from Labour to massively cut the length of time foreign owners of property in the UK will be given to declare their true identity, in an effort to “tighten the net on dirty Russian money as soon as possible”.

Labour said on Wednesday it wanted to speed up the process of bringing the new register of overseas entities into force, with applications required within 28 days of the legislation passing.

Shadow foreign secretary David Lammy said: “We welcome the government’s U-turn under pressure from Labour to tighten the law so we can move on more oligarchs tied to Putin’s regime, but we must also move faster, acting against these individuals in days not months.”

Amendments to the Economic Crime Bill will be expedited through all its Commons stages on Monday, the FCDO said.

It added that the government is looking for “swift passage” in the Lords in order to get royal assent as soon as possible.

On Friday morning, Labour leader Sir Keir Starmer called for the Government to go “further and faster” with sanctions.

Speaking during a visit to Birmingham following Labour’s by-election win, he said: “Where the government is taking action on sanctions, we support them. But they have got to go further and faster.”

Labour Party chairwoman Anneliese Dodds also told Sky News the UK has got to “stop dragging” its feet in clamping down on funds that have come from figures linked to Putin.

“We’ve been at the vanguard of taking action and, of course, what is really important is we act in concert with our allies, European, American, and other NATO allies,” he said.