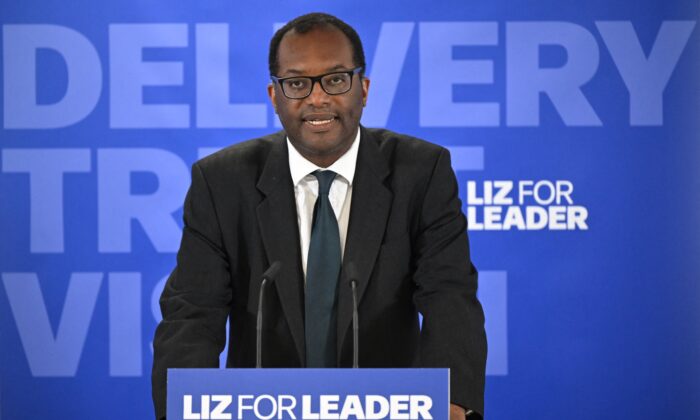 Britain's Business Secretary Kwasi Kwarteng delivers a speech at the launch of the campaign of Foreign Secretary Liz Truss (not seen) to become the next leader of the Conservative Party, in London, on July 14, 2022. (Justin Tallis/AFP via Getty Images)
Technology

The UK government has blocked a proposed takeover of an electronic design company by a Hong Kong-based firm on national security grounds.

In an Aug. 17 order, Business Secretary Kwasi Kwarteng ruled that the acquisition of the Bristol-based Pulsic by Super Orange HK Holding shouldn’t proceed.

Kwarteng said the decision is “necessary and proportionate to mitigate the risk to national security.”

Pulsic’s intellectual property and software could be used to “facilitate the building of cutting-edge integrated circuits that could be used in a civilian or military supply chain,” according to the Department for Business, Energy, and Industrial Strategy (BEIS).

The firm’s electronic design automation tools “could be exploited to introduce features into the design, including automatically and/or without knowledge of the user that could be used to build defence or technological capabilities,” BEIS stated.

The move was the latest attempt by the UK government to limit Chinese involvement in UK businesses, especially the tech sector.

The decision was made under the National Security and Investment Act 2021, which came into force on Jan. 4 in possibly the biggest shake-up of the UK’s national security regime in 20 years.

The act grants new powers to the government to scrutinise and intervene in certain acquisitions made by anyone—including businesses and investors—that could harm the UK’s national security.

In July, Kwarteng used the act to block Beijing Infinite Vision Technology Co. from buying vision-sensing technology from the University of Manchester.

Under the law, Kwarteng is also presiding over an investigation into the takeover of Newport Wafer Fab by Nexperia, a Netherlands-based subsidiary of the Chinese smartphone manufacturer Wingtech Technology.

Foreign Secretary Liz Truss, currently the frontrunner in the race to replace Boris Johnson as Conservative Party leader and prime minister, said on Aug. 17 that the Chinese communist regime’s increasing assertiveness is a “deep security concern” for the UK.

Speaking at a Tory leadership hustings in Belfast, Northern Ireland, Truss said: “We should look at making sure we’re not exporting technology that can be used against us. We need to clear investment screening, and we’ve developed that to make sure that we can’t have acquisitions of key strategic assets.

“And we need to be clear that we should not become strategically dependent on China in the way that Europe became on Russia.”