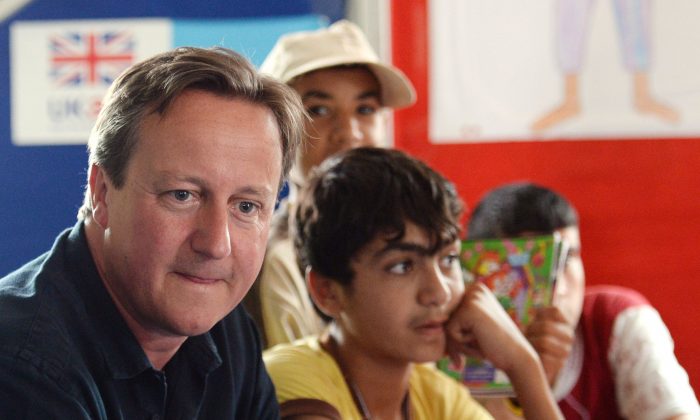 OPATOVAC, Croatia—The latest news as migrants fleeing war or seeking a better life make their way across Europe by the tens of thousands. All times local.

Bishops from the Church of England are urging the government to accept more Syrian refugees, arguing that Britain’s response to the crisis has been inadequate.

More than 80 bishops have written to Prime Minister David Cameron calling for the country to accept as many as 50,000 refugees—30,000 more than already pledged.

They wrote that “it would be a meaningful and substantial response to the scale of human suffering we see daily.”

The bishops sent the letter to Cameron in September, but released it publicly after failing to receive what they described as an adequate response.

Defense Secretary Michael Fallon on Sunday defended the government’s actions on Syria, telling the BBC’s Andrew Marr program it had spent more than $1 billion pounds ($1.5 billion) to support refugees in camps near Syria.

The head of a union representing German police says he favors building a fence on the country’s border, something that Chancellor Angela Merkel has said repeatedly wouldn’t work.

Rainer Wendt, head of the German Police Union, was quoted Sunday as telling the Welt am Sonntag newspaper that “if we want to conduct serious border controls, we must build a fence along the German border. I am in favor of our doing this.”

Merkel’s government faces increasing pressure to limit the influx of migrants as Germany struggles to house newcomers. Wendt argued that “someone must pull the emergency brake now—that can only be Angela Merkel.”

Hungarian officials say no migrants have breached the fence Hungary has built on its border with Croatia on the first day since the border was closed.

Hungary decided to shut its border with Croatia to the free flow of migrants on Saturday, after erecting a fence protected by coils of razor wire, police and soldiers on long stretches of the boundary between the two countries. Hungary finished a similar fence its border with Serbia last month.

To avoid Hungary, migrants are now being sent by Croatia to Slovenia, from where they continue their journey toward Germany and other European Union countries.

Government spokesman Zoltan Kovacs said that despite the lack of migrants entering Hungary, “we know exactly that in the background the number of illegal migrants has not diminished, there is constant pressure on the European borders.”

Over 390,000 migrants have entered Hungary this year.

German Chancellor Angela Merkel is meeting Turkish leaders to promote an EU plan that would offer aid and concessions to Turkey in exchange for measures to stem the mass movement of migrants into Europe.

Merkel arrived in Istanbul on Sunday as thousands of new arrivals a day are stretching Germany’s capacity to house refugees and other migrants.

Officials said the incentives offered to Turkey would involve an aid package of at least 3 billion euros ($3.4 billion) to help Turkey host the more than 2 million refugees that are in the country, as well as easier access to EU visas for Turkish citizens and re-energized EU membership talks.

Apart from the migrant crisis, the Turkish and German leaders will also discuss the fight against terrorism and the situation in Syria.

A spokesman for the United Nations refugee agency is warning Hungary’s decision to close its border for migrants has increased their suffering and could lead to a backlog down the route.

Baloch says some 4,000 migrants have arrived in Slovenia since Hungary shut down the border on midnight Friday. Thousands more were stranded Sunday in Croatia and Serbia, waiting to move on.

Baloch warns “there will be challenges if the process becomes slow or we have a backlog of people.”

Austrian police say that about 1,000 refugees and other migrants were registered on Saturday and overnight as they arrived at one of the country’s main border crossings with Slovenia.

Police in Styria province said that around 500 of those arrived at the Spielfeld crossing in Austria’s southeastern corner between the evening and Sunday morning, the Austria Press Agency reported. Most of the new arrivals were taken by bus to the cities of Graz and Klagenfurt.

The flow of people seeking shelter in richer European Union countries was rerouted through tiny Slovenia on Saturday after Hungary closed its border with Croatia.

Thousands of migrants are stranded in fog and cold weather in Serbia and Croatia after Hungary closed its border with Croatia and the flow of people was redirected to a route via Slovenia.

Slovenia has said it will only take in 2,500 people a day, significantly slowing down the movement.

Croatian police said Sunday nearly 4,000 people remained in the refugee camp in Opatovac, where some 50 buses were parked waiting to take the migrants toward Slovenia, the next step on their journey.

Across the border in Serbia, hundreds of people have been sitting in some 20 buses since early hours Sunday waiting to cross to Croatia. More are expected to arrive during the day.

The migrant route switched to Slovenia on Saturday after Hungary closed its border for the influx.