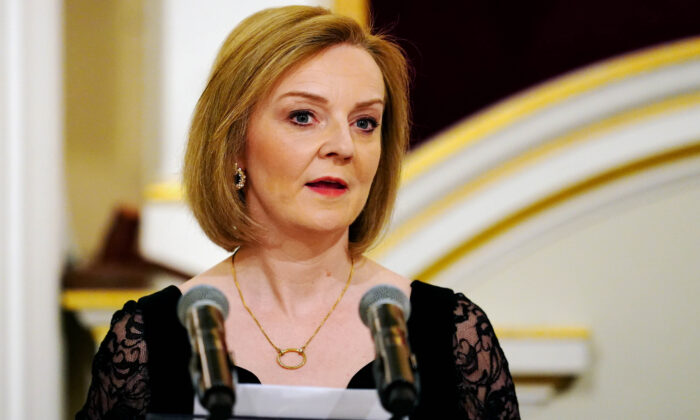 Foreign Secretary Liz Truss speaking at the Easter Banquet at Mansion House in the City of London on April 27, 2022. (Victoria Jones/PA Media)
UK

The UK government has announced a ban on exports of management services to Russia, as it further ratchets up economic pressure on the Kremlin following its invasion of Ukraine.

Russia’s access to the UK’s management consulting, accounting, and public relations services will be cut off, Foreign Secretary Liz Truss said on May 4.

Russia is heavily reliant on Western services companies for the production and export of manufactured goods, and the UK accounts for 10 percent of Russian imports in these sectors, according to the UK Foreign Office.

Truss said in a statement: “Doing business with [Russian President Vladimir] Putin’s regime is morally bankrupt and helps fund a war machine that is causing untold suffering across Ukraine. Cutting Russia’s access to British services will put more pressure on the Kremlin and ultimately help ensure Putin fails in Ukraine.”

“By restricting Russia’s access to our world-class management consultants, accountants, and PR firms, we’re ratcheting up economic pressure on the Kremlin to change course,” he said.

But according to industry bodies, many British accountancy and consultancy firms have already taken steps to cut their business links with Russia since the invasion began on Feb. 24.

Iain Wright, managing director of the Institute of Chartered Accountants (ICAEW), said: “Many of our individual members and member firms have already taken proactive steps to disengage as appropriate with Russia.”

He said his organisation is “confident” that British accountants will be “ready and willing to play the fullest possible role in making these further measures effective.”

Likewise, the Management Consultancies Association (MCA) said: “UK consultancy firms already ceased services to Russia at the outset of hostilities in Ukraine and have made rapid changes to their operations in the country, strictly abiding to sanction rules and complying with all new regulations & laws.”

MCA chief executive Tamzen Isacsson added: “The amount of services exported previously to the country was very small and it was not a major foreign market for UK management consultancy services.”

Those sanctioned include significant individuals at Channel One, a major state-owned outlet in Russia, as well as war correspondents who are embedded with Russian forces in Ukraine.