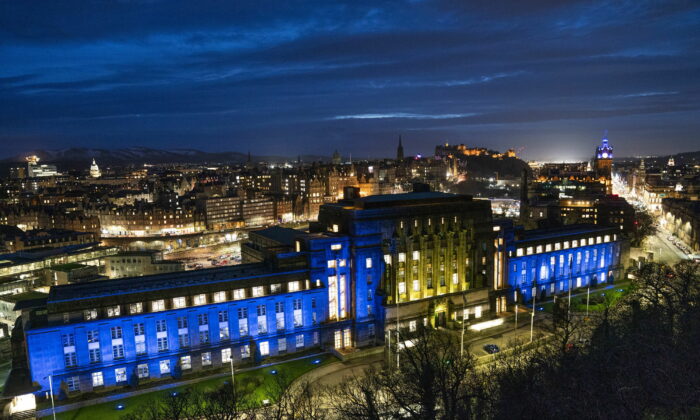 St Andrew's House in Edinburgh, Scotland, is lit up with the colors of the Ukraine flag on Feb. 25, 2022. (Jane Barlow/PA via AP)
Economy

UK Bans All Ships With Russian Links From British Ports

LONDON—Britain on Tuesday banned any ship with Russian connections from entering its ports as the country stepped up efforts to isolate President Vladimir Putin’s government because of its war in Ukraine.

Announcing the blanket ban in a tweet, British Transport Secretary Grant Shapps encouraged other countries to prohibit ships tied to Russia from using their ports.

“We’ve just become the first nation to pass a law involving a total ban of all ships with any Russian connection whatsoever from entering British ports,” Shapps said.

The decision came a day after Scotland’s first minister, Nicola Sturgeon, urged Shapps to block a Russian tanker from docking in the Orkney Islands, where the ship was due to arrive Tuesday. The NS Champion is owned by Sovcomflot, a Russian state-owned company that specializes in the transportation of oil, oil products, and liquefied natural gas.

Western countries have imposed wide-ranging sanctions on Russian companies, wealthy individuals, and even Putin in an effort to end the war in Ukraine. Sovcomflot, the Russian state-owned company that owns NS Champion, hasn’t been sanctioned by the U.K.