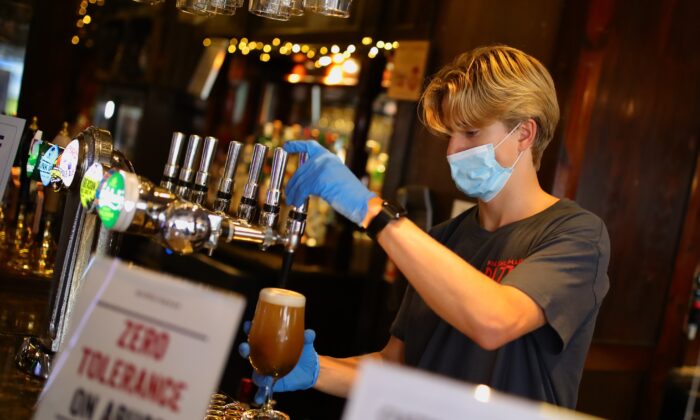 British workers have seen their pay slump in real terms at the fastest rate on record, official statistics have revealed.

According to data released by the Office for National Statistics (ONS) on July 19, regular wages (excluding bonuses) rose slightly by 4.3 percent over the three months to May.

However, when adjusted for inflation, regular pay in real terms plunged by 2.8 percent, representing the biggest fall in pay since the data started being recorded in March 2001.

The UK’s rate of inflation, as measured by consumer price index (CPI), hit a 40-year record of 9.1 percent in May and is expected to reach as high as 11 percent later this year.

Researchers said they saw the fastest increases in prices for products such as dog food, butter, and milk.

Supply chain issues and labour pressures have added to costs in food production, which are now being fed back to shoppers.

Fraser McKevitt, head of retail and consumer insight at Kantar, said he expects the overall record for grocery inflation to be surpassed in August.

“Taking a barbecue as an example, buying burgers, halloumi, and coleslaw for some al fresco dining would cost you 13 percent, 17 percent, and 14 percent more than it would have this time last year,” he said.

Newly-appointed Chancellor Nadhim Zahawi. has pledged to get inflation back under control, while the Bank of England has also insisted it will return CPI to its 2 percent target.

The bank has raised interest rates at each of its last five meetings to 1.25 percent as it looks to rein in inflation, with further hikes on the way.

But experts believe the inflation rate will soar even further.

Ellie Henderson, an economist at Investec Economics, said a driving factor behind the high inflation is rising fuel prices.

Also, she added, given the continued war in Ukraine, “high food price inflation is likely to have remained in June, exacerbated by a weaker sterling given the UK’s dependence on imported food products.”