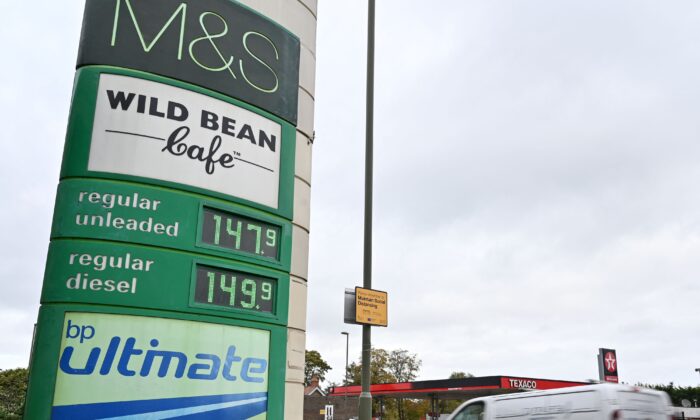 A sign displays the price per litre of petrol and diesel fuels, outside a filling station in Lower Kingswood, south of London, on Oct. 26, 2021. (Glyn Kirk/AFP via Getty Images)
UK

The UK government on Tuesday authorised British oil companies to release up to 1.5 million barrels of oil from their strategic reserves to ease pressure on energy prices.

The Prime Minister’s official spokesman said that it was part of a coordinated international move led by the United States, which is releasing 50 million barrels.

“We will work closely with our international partners like the U.S. to do what we can to support the global economy through the transition following the pandemic,” the spokesman said. “That is why we are joining other countries led by the U.S. and including China, India, Japan, and Korea in allowing companies in the UK to voluntarily release some of their oil reserves.”

The spokesman said this is a “sensible and measured step to support global markets as we emerge from the pandemic.”

He emphasised that the move “will be voluntary, not mandatory.” But he said, “If all companies were to choose this flexibility, it would release the equivalent of 1.5 million barrels of oil.”

The United States has repeatedly asked the Organization of the Petroleum Exporting Countries and its allies such as Russia, known as OPEC+, to pump more oil. However, OPEC+ has rebuffed the requests at its monthly meetings. It meets again on Dec. 2 to discuss policy but has so far shown no indication it will change tack.

Crude oil prices have surged to seven-year highs, with global demand seeing a sharp rebound from the lows during the COVID-19 pandemic, which was caused by the CCP (Chinese Communist Party) virus.

It is the 10th consecutive week that prices have risen. Record highs set in April 2012 were exceeded last month and prices have continued to increase since then.

The average cost of petrol and diesel has increased by around 34 pence per litre ($1.72 per gallon) in the past 12 months.

This has made it approximately £19 ($25) more expensive to fill a typical 55-litre family car.

Tom Ozimek, Reuters, and PA contributed to this report.