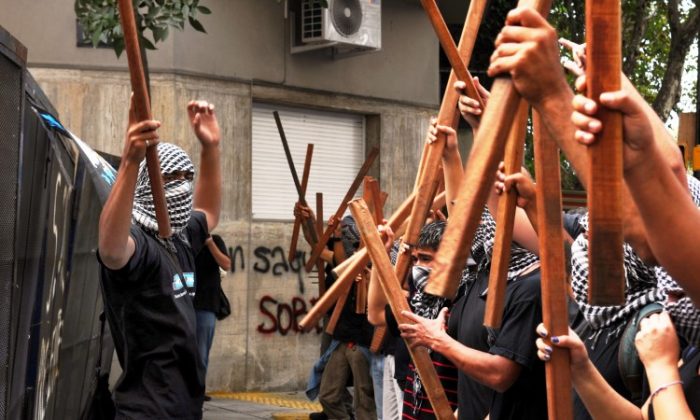 Members of Quebracho political group demonstrate in front of the fences that block their way to the British embassy in Buenos Aires on April 2, 2012. (Daniel Garcia/AFP/Getty Images)
Europe

The U.K. and Argentina are holding services for the 30-year anniversary of the Falkland Islands war, media reports said.

Around 255 British soldiers and approximately 650 Argentine civilians died in the conflict after Argentina invaded the islands in 1982.

Argentina recently reasserted that it would control the islands, starting a war of words between the two nations, while renewing tensions. The U.K. has controlled the islands since 1833 and said it inherited them from Spain.

Cameron added that this “was the fundamental principle that was at stake thirty years ago: and that is the principle which we solemnly re-affirm today,” the statement reads.

“Today is a day for commemoration and reflection: a day to remember all those who lost their lives in the conflict—the members of our armed forces, as well as the Argentinian personnel who died,” Cameron said.

Demonstrators are set to march in the capital, Buenos Aires, to protests against “imperialist colonialism” at the hands of the British, reported the MercoPress news agency. The demonstration is expected to end at the U.K. embassy in the city.