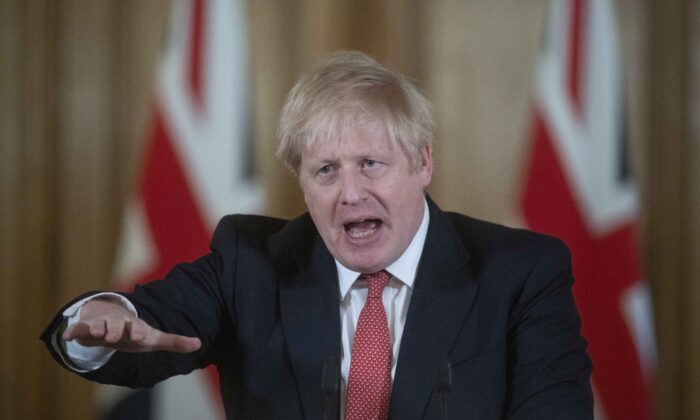 The UK has joined other European nations in enacting a lockdown that will be enforced by law, banning all gatherings of over two people to try to stem the spread of COVID-19.

“From this evening I must give the British people a very simple instruction—you must stay at home,” said prime minister Boris Johnson during an address to the nation.

Johnson has previously held off from adopting the more stringent restrictions on freedom seen in much of Europe.

The British authorities had only previously advised the public on social distancing, in addition to shutting down restaurants, pubs, and gyms, but leaving many other types of shops and services open.

But after images of people gathering in crowds at tourist spots over the weekend sparked anger, the prime minister said today that they needed to adopt legal restrictions.

The British public will now only be allowed to leave home for essential shopping for food, and for a single period of exercise a day, such as walking, cycling, or running. People can also travel to and from work.

All stores will be shut, except for food stores.

Parks will remain open for exercise, but any gatherings other than immediate family in the home will be limited to 2 people.

The measures, which will last for three weeks, are effective immediately.

“If you don’t follow the rules the police will have the powers to enforce them, including through fines and through dispersing gatherings,” said the prime minister in a statement to the nation.

The death toll from the virus in the UK currently stands at 335, out of a total number of 8,547 identified cases.

The UK has generally lagged behind its European neighbors in terms of the stringent measures to tackle the CCP virus, commonly known as the novel coronavirus.

The UK was almost the last country in Europe to close schools, after following different scientific modeling and advice from other European nations.

Since it spread from China, the CCP virus, commonly known as the novel coronavirus, has formed a secondary epicenter in Europe, with Spain, Germany, and France picking up more than 40,000 confirmed cases in total.

Spain, France, and Italy, along with some other European nations, have adopted even more stringent lockdowns in an effort to stem the spread of the virus.

Italy, which has just under 60,000 COVID-19 virus cases and over 6,000 deaths, banned travel within the country after freezing non-essential business activity. Spain wants to extend until April 11 a state of emergency it imposed this month. The country has reported over 33,000 cases of the virus with 2,200 deaths.

Meanwhile, China, where the outbreak began, still has the most at 81,000 recorded cases and 3,153 recorded deaths, numbers many experts have said are dubious given the regime’s history of underreporting.