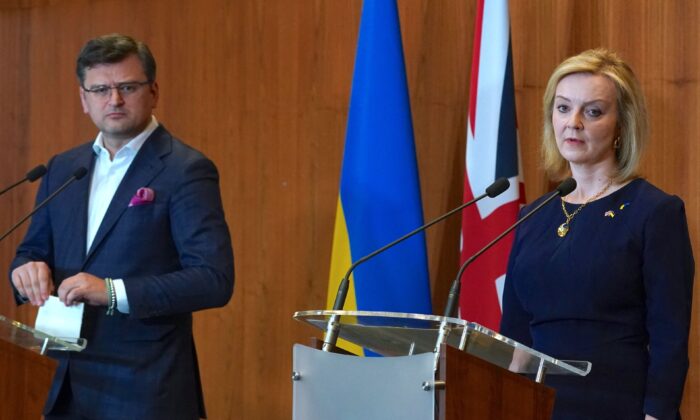 Foreign ministers of the UK and Ukraine on Saturday criticised “defeatist voices” from those they said are proposing to “sell out Ukraine for a quick end to the unrelenting horror.”

British Foreign Secretary Liz Truss and her Ukrainian counterpart Dmytro Kuleba said Ukraine and the free world “do not have the luxury to feel fatigued,” and urged leaders of the Group of Seven (G-7) and NATO to renew their support of Ukraine in its resistance to the Russian invasion in the alliances’ meetings this week.

It came before British Prime Minister Boris Johnson told G-7 leaders in Germany that the price of allowing Russia to succeed and “hack off huge parts of Ukraine” will be “far, far higher” than the price of supporting Ukraine.

In an op-ed published in The Telegraph, Truss and Kuleba said Ukraine had to negotiate “from a position of strength” in order to ensure lasting peace.

“There can be no negotiated settlement which replicates the Minsk Agreement, which came at the expense of Ukraine’s sovereignty, security, and territorial integrity,” the ministers said.

They suggested any deal including “sacrificing Ukraine’s land” would be paying for an “illusion of peace” with Ukrainian blood.

“It will be a mirage unless accompanied by the restitution of Ukrainian territory and the containment of Putin’s imperialism,” the ministers said, referring to Russian President Vladimir Putin.

The pair argued that the Ukrainian people were fighting not only for their own future, but for “the future of freedom and democracy across Europe and the wider world.”

They also said Ukraine “can win this battle” with “the free world’s unyielding support.”

“To get peace and protect our way of life, Ukraine and the free world need to stay strong and united. We must ignore the defeatist voices who insist people are beginning to tire and who propose to sell out Ukraine for a quick end to the unrelenting horror,” the op-ed reads.

“The Ukrainian people do not have the luxury to feel fatigued. Nor can the rest of the free world. The evidence of heinous war crimes continues to mount, from the bombardment of innocent Ukrainian civilians to rape, torture, and abduction.”

It comes after Johnson warned NATO allies it would be a “disaster” to pressure Ukraine into accepting a “bad peace” deal that would see swathes of territory surrendered to Putin.

Speaking earlier this week, he said he thought Ukraine would win the conflict, but “they need to be properly supported.”

Johnson said there is “no question there is a lot of Ukraine fatigue now in the world.”

Asked on Saturday what he meant by this, he said: “I know it is tough. I know it is tough in the UK. I know the cost of food has gone up. Everybody is looking at this and too many countries are saying this is a European war that is unnecessary.

“It is an economic problem that we don’t need and so the pressure will grow to encourage, coerce maybe, the Ukrainians to a bad peace.”

Pressed on who this was coming from, he said: “I think just generally. I just think there is a general sentiment.”

Johnson also said on Saturday that he could resign as prime minister if his Cabinet decides the UK has to “abandon the Ukrainian cause because it was simply getting too difficult.”