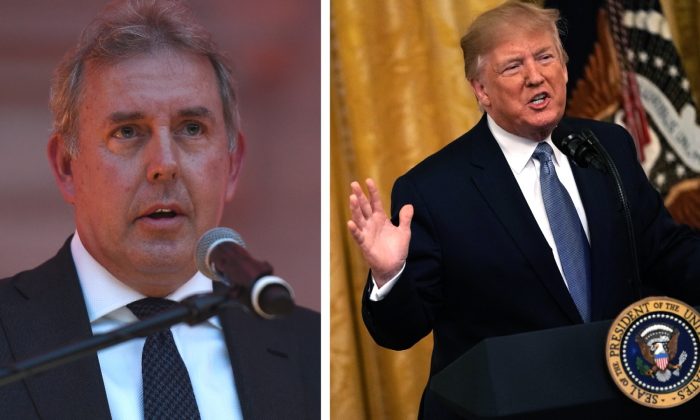 UK Ambassador to the US Kim Darroch Resigns After Criticizing Trump

The British ambassador to the United States has resigned days after memos leaked showing him criticizing the administration of President Donald Trump.

The leaked cables, which were widely circulated in the press in both countries, showed Kim Darroch claiming Trump “radiates insecurity.”

Darroch said in a letter on July 10 that “the current situation is making it impossible for me to carry out my role as I would like.”

BREAKING: Sir Kim Darroch has resigned as British ambassador to the US.

He said in letter: “The current situation is making it impossible for me to carry out my role as I would like… The responsible course is to allow the appointment of a new ambassador.” pic.twitter.com/z2IpWE2ARz

“Since the leak of official documents from this Embassy there has been a great deal of speculation surrounding my position and the duration of my remaining term as ambassador,” Darroch wrote. “I want to put an end to that speculation.”

“Although my posting is not due to end until the end of this year, I believe in the current circumstances the responsible course is to allow the appointment of a new ambassador,” he added.

“I am grateful to all those in the UK and the US, who have offered their support during this difficult few days. This has brought home to me the depth of friendship and close ties between our two countries. I have been deeply touched.”

The letter was sent to Simon McDonald, the senior official at the Foreign Office.

Theresa May says “it is a matter of great regret that (Sir Kim Darroch) has felt it necessary to leave his position” as UK ambassador to the US, saying it is important to “defend our values and principles, particularly when they are under pressure” https://t.co/aLysk7nWa2 #PMQs pic.twitter.com/q7dTXn8IFg

McDonald responded by saying he accepted the resignation before praising Darroch for behaving during aftermath of the leak “as you have always behaved over a long and distinguished career, with dignity, professionalism, and class.”

“The prime minister, foreign secretary and whole of the public service have stood with you: you were the target of a malicious leak; you were simply doing your job,” McDonald added.

Reacting to the news at the House of Commons, Prime Minister Theresa May praised Darroch for “a lifetime of service to the United Kingdom.”

“We owe him an enormous debt of gratitude. I hope the house will reflect on the importance of defending our values and principles particularly when they are under pressure,” she added.

The wacky Ambassador that the U.K. foisted upon the United States is not someone we are thrilled with, a very stupid guy. He should speak to his country, and Prime Minister May, about their failed Brexit negotiation, and not be upset with my criticism of how badly it was…

…handled. I told @theresa_may how to do that deal, but she went her own foolish way-was unable to get it done. A disaster! I don’t know the Ambassador but have been told he is a pompous fool. Tell him the USA now has the best Economy & Military anywhere in the World, by far…

….and they are both only getting bigger, better and stronger…..Thank you, Mr. President!

President Trump had publicly reacted to Darroch’s criticism of his administration, writing on July 9, “The wacky Ambassador that the U.K. foisted upon the United States is not someone we are thrilled with, a very stupid guy.”

May had previously said she had “full faith” in Darroch, saying that the ambassador’s job was “to provide honest and unvarnished opinions.”