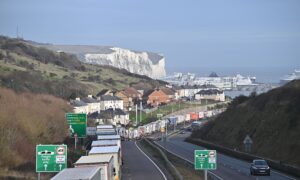 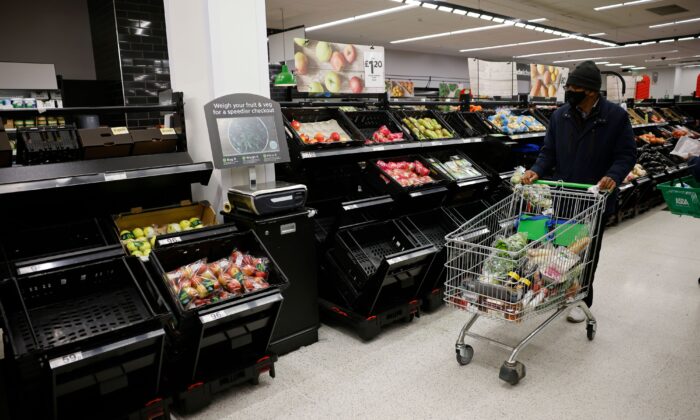 A shopper wearing a face mask pushes a trolley past empty fruit and vegetable troughs inside an ASDA supermarket in Walthamstow in northeast London, on Dec. 22, 2020. (Tolga Akmen /AFP via Getty Images)
UK

British consumers are “almost certain” to see their fresh food supplies impacted by the continuing disruptions in cross-Channel traffic caused by the two-day French border closure, a business group warned on Wednesday.

France ended its ban on UK arrivals on Wednesday morning, but the disruptions continue as the backlog is set to take several days to clear.

This will likely cause a shortage of fresh fruits and vegetables in UK supermarkets from next week, warned the Food and Drink Federation (FDF), the UK’s representative body for the food and beverage manufacturing sector.

“Even working extremely quickly and with Calais possibly shut for Christmas Day it is clear that it could take until the New Year to return to normal operations,” said Ian Wright, FDF chief executive, as “lorries will take time to return to their normal pattern of collection and delivery.”

“That means we are likely to see, locally, reduced on-shelf availability of some fresh vegetables and fruits, beginning next week,” he said, adding that there could also be “potential significant disruption” to the flow of ingredients into the UK.

“Though all in the industry are already working hard to mitigate any impact for shoppers they are almost certain to be impacts across the supply chain.”

Wright warned that there could also be “medium-term” challenges, as lorry drivers from continental Europe may be deterred from traveling to the UK by the disruption, which was caused by a new variant of the CCP (Chinese Communist Party) virus detected in England.

“We must ensure that continental lorry drivers are willing in future to bring their trucks to the UK to ensure that the ‘carousel’ of trade runs smoothly. They must be confident that they can exit the UK quickly and efficiently,” he wrote on Twitter.

Wright urged the authorities to give priority to “perishable loads like seafood and other fresh, short shelf-life foods.”

Scottish food exporters said pre-Christmas sales had been “ruined” for some shellfish firms, as their exports are stuck at the port of Dover.

Wright also urged the government to pay compensation to the affected firms, as “many businesses have lost very valuable—but uninsurable—consignments in these delays through no fault of their own.”

The UK is heavily dependent on continental Europe for fresh fruits and salad vegetables in the winter season, as such fresh produce is not grown in Britain at this time of the year, said the British Retail Consortium (BRC), a business group representing the retail industry, at a briefing to a Parliamentary committee on Tuesday.

Andrew Opie, BRC director of food and sustainability, told MPs that the UK will have problems with fresh produce on Dec. 27 unless the trucks can travel back to Spain and Portugal and other parts of Europe by Wednesday.