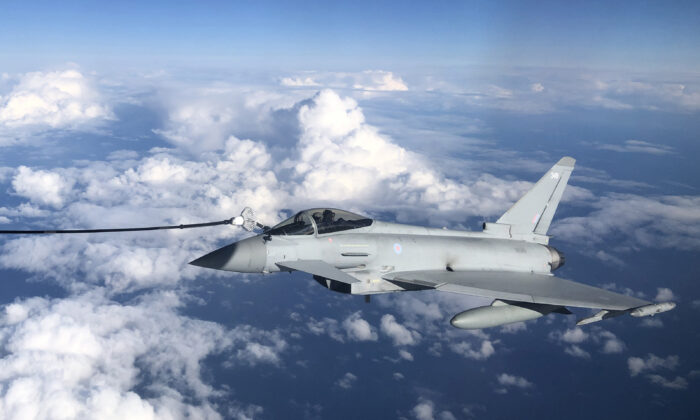 An RAF Typhoon combat aircraft refuels from an RAF Voyager aircraft in flight over the North Sea, on Oct. 8, 2020. (Leon Neal/Getty Images)
UK

The jets were launched from RAF Lossiemouth in Scotland and were joined by a Voyager air-to-air refuelling tanker from RAF Brize Norton in Oxfordshire.

The incident took place less than a day after British Prime Minister Boris Johnson’s visit to Kyiv, where he warned Russia it would face automatic sanctions if it invades Ukraine.

An RAF spokesman said: “Quick reaction alert Typhoon fighters based at RAF Lossiemouth supported by a Voyager from RAF Brize Norton were scrambled today against unidentified aircraft approaching the UK area of interest.

The RAF said that at no point did the Russian aircraft enter UK airspace.

“Bear” is the NATO reporting name for the Tu-95 and Tu-142 strategic bomber.

Such interceptions are by no means rare for the RAF. Russian military aircraft regularly test the response of adversaries, including the United States.

Sometimes referred to as Eurofighters due to their pedigree as a joint Europe project, Typhoons are described as multi-role aircraft by the RAF.

They are primarily used as part of the Quick Reaction Alert force: ready to take off at a minute’s notice to intercept aircraft that cross into UK airspace.

In recent months, the British government has been vocal in its response to Russian military build-up on its border with Ukraine, where more than 100,000 Russian troops are believed to have been amassed.

Prime Minister Boris Johnson said in Kyiv on Tuesday that the UK and its Western allies are ready to launch sanctions against Russia “the moment the first Russian toecap crosses further into Ukrainian territory.”

Downing Street said it has a package of sanctions ready that can “severely” hurt Russia’s economy.