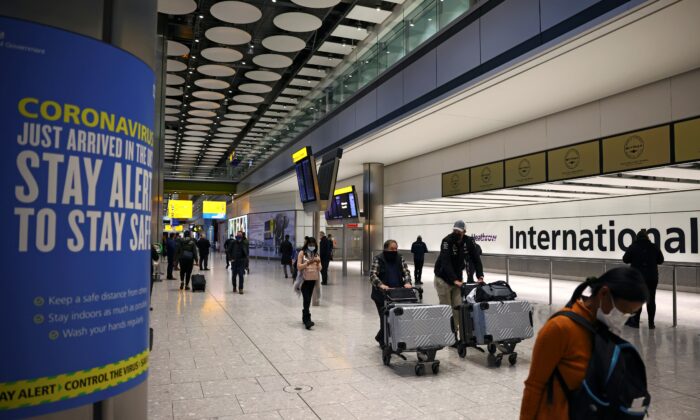 Travellers walk through the arrivals area, as tighter rules for international travellers start, at Heathrow Airport, amid the spread of COVID-19 pandemic, London, Britain, on Jan. 18, 2021. (Henry Nicholls/Reuters)
UK

Direct flights from six countries in Southern Africa are temporarily banned from midday Friday over concerns of a new CCP (Chinese Communist Party) virus variant, the UK government has announced.

South Africa, Botswana, Eswatini, Lesotho, Namibia, and Zimbabwe will be on England’s “red list” from midday Friday, meaning only British or Irish citizens and residents will be allowed to enter England if they have been to one of these countries in the past ten days, Health Secretary Sajid Javid said on Thursday.

Arrivals from red list countries must enter managed hotel quarantine upon arrival, and take three CCP virus tests: within three days before arriving in the UK and on day 2 and day 8 after arriving. Children also have to enter managed quarantine, with under-11s exempt from one or all of the tests depending on their age.

Javid said the hotel quarantine rule will take effect from 4 a.m. on Sunday, and direct flights from the six countries will be banned from midday Friday until then.

Scotland’s announcement says those arriving after 4 a.m. on Saturday must book into managed quarantine.

Those who will arrive before the cut-off time and have been to any of the six counties in the past 10 days are required to self-isolate for 10 days and take two tests on day 2 and day 8.

Javid also asked those who are already in the UK and have been to any of the six countries in the past 10 days to take a PCR test.

The travel ban came after a new CCP virus variant, identified as B.1.1.529, was detected in South Africa.

More investigation is required regarding the new variant, but Javid said early indications suggest it “may be more transmissible than the Delta variant, and the vaccines that we currently have may be less effective against it.”

The government said the travel ban is “precautionary” as no cases of the new variant have been detected in the UK.

To date, 10 cases of the new variant have been confirmed by genomic sequencing, with three cases in Botswana, where it was first detected; six cases in South Africa; and one case in Hong Kong, in a traveler from South Africa.

Israel has also enacted travel bans from the six countries.