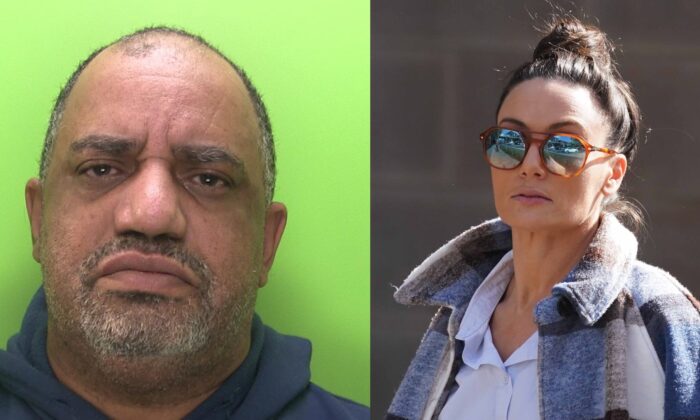 Actress Zara Phythian (R) arrives at Nottingham Crown Court on May 10, 2022 for her trial on charges of historical sex abuse along with her husband Victor Marke (L). (Nottinghamshire Police/PA Media)
UK

A British actress who appeared in the 2016 Marvel superhero film “Doctor Strange” has been jailed for eight years for sex crimes against a teenage girl.

Zara Phythian, 37, and her screenwriter husband Victor Marke, 59, were convicted at Nottingham Crown Court last week of 14 counts of sexual activity with a child who they groomed and abused from the age of 13.

Marke, who was also convicted of four counts of indecently assaulting a second underage girl, was jailed for 14 years.

The crimes Phythian and Marke were convicted of dated from between 2005 and 2008.

Phythian played a “brunette zealot” in “Doctor Strange”—which starred Benedict Cumberbatch in the title role—but did not appear in the sequel, “Doctor Strange in the Multiverse of Madness,” which is currently in cinemas.

Despite her small role in the Hollywood blockbuster in 2016, Phythian’s career never moved on to another level and in 2017 she appeared in a low-budget British comedy, “Cannibals and Carpetfitters.”

According to IMDB, her latest film “Unit 19,” a sci-fi movie set in 2185, was written by Marke and has not yet been completed.

The couple’s conviction is expected to be terminal for the project.

After Kevin Spacey was accused of sexually harassing several young men in 2017, his scenes in the Ridley Scott thriller “All the Money in the World” were dumped and reshot with Christopher Plummer in the role of J. Paul Getty.

Sentencing Phythian, Judge Mark Watson told her: “Whilst you denied in cross-examination that you were besotted with Victor Marke, on the evidence I have heard I am in no doubt that your deviance was shaped by the influence that he had upon you from an early age. I cannot ignore that it started at a time when you were still young.”

But he said that did not excuse the “choices” she had made and he added: “You were by then successful in your own right. You chose to play your part.”

Watson told Marke, “I regard you as the driving force behind the abuse.”

Under English the law the pair will be considered for parole after serving half of their sentences.

The trial heard the victim, who cannot be named for legal reasons, had been threatened by Marke and she described the couple as both having “Jekyll and Hyde” personalities.

Phythian told the court she got her big break in films after being spotted at a martial arts competition in the United States.

She said she formed a relationship with Marke, who was a martial arts instructor, when she was 19.