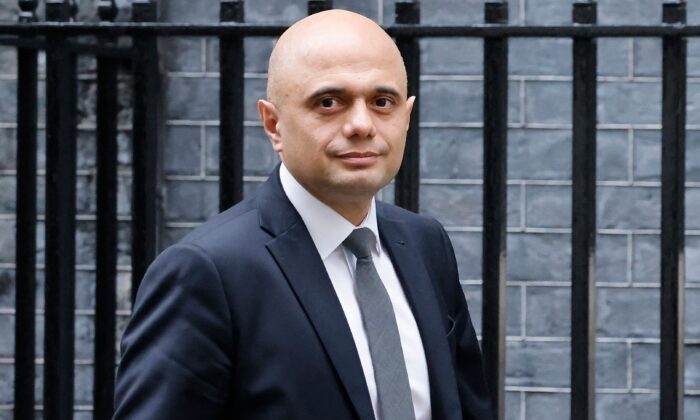 A 60-year-old man has been charged after he was arrested outside Health Secretary Sajid Javid’s home in London.

Geza Tarjanyi, a campaigner against CCP (Chinese Communist Party) virus vaccines and the UK government’s pandemic policy, appeared at Westminster Magistrates’ Court on Tuesday, charged with having an article with intent to destroy or damage property under the Criminal Damage Act 1971. The Metropolitan Police didn’t release any details on the article.

Tarjanyi was released on bail and is due to appear at Isleworth Crown Court on Feb. 1.

The Lancashire activist reportedly knocked on the door at Javid’s home on Monday and “served” his young daughter with a warning about the vaccines, a tactic he had used on medical broadcaster Dr. Hilary Jones last year, when he pushed a leaflet into Jones’s letterbox with a wooden spatula.

A short video online appears to show police officers knocking what looks like a spray can out of Tarjanyi’s hand before handcuffing him.

He told the officers that he wanted to be arrested, before turning to his cameraman, saying: “Let’s see if I get my day in court. This is Sajid Javid’s house. He’s now been served papers. He’s now been put on notice. Get this to every MP in the country.”

Tarjanyi previously followed and filmed England’s Chief Medical Officer Chris Whitty and Deputy Chief Medical Officer Jonathan Van-Tam—both of whom regularly appear with Prime Minister Boris Johnson in COVID-19 press briefings—in the streets in two separate incidents, accusing them of lying to the nation about COVID-19 and threatened, “All of you liars will be going to prison … for genocide.”

In a video dated Oct. 28, 2021, Tarjanyi was shown filming himself walking to Jones’s house in Kent, and pushing through the door his “Yellow Card Leaflet” with information on informed consent and alleged side effects of the CCP virus vaccines printed on the front, and assertions such as “vaccinated people are dangerous for others” on the back.

The activist said in the video that the tactic was aimed at creating a debate.

“Best wishes to the Health Secretary and his family. They shouldn’t have to deal with this,” he wrote on Twitter.

It comes after Javid said he was “appalled” by the “vile behaviour” of protesters who disrupted a test and trace centre in Milton Keynes on Dec. 29.

In an email to The Epoch Times, a spokesperson from the Department of Health and Social Care said, “We keep all available evidence under review and we will continue to follow the advice of the independent Joint Committee on Vaccination and Immunisation (JCVI) on the future of our COVID-19 vaccination programme.”

The Epoch Times has reached out to Tarjanyi for comment.

This report has been updated with the response from the DHSC.