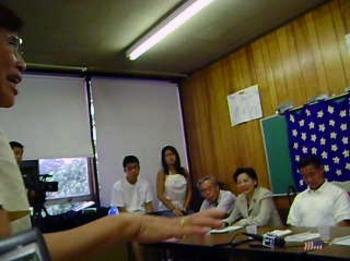 FLUSHING, New York City—New York City Councilman John Liu and Assemblywoman Ellen Young, both from Taiwan, attended the meeting held at a Jewish synagogue in Flushing on August 18, to collect opinions from the public and answer questions for the U.S. Democratic Party presidential candidate Senator Barack Obama. They declined to make comments on the concerns over Taiwan affairs brought up by three Taiwanese Americans. Councilman Liu appeared to be distracted by his cell phone several times and showed no interest in the criticism of the Bush administration’s policy in favor of the Chinese regime over Taiwan.

The current U.S. policy stems from the Shanghai Joint Communiqué, issued Feb 27, 1972, but originally drafted by U.S. President Richard Nixon’s Secretary of State Henry Kissinger in October, 1971 (the same year that Taiwan, known as the Republic of China, lost its United Nations seat to mainland China) when he met in Beijing with the Chinese Prime Minister Chou En-lai to lay the groundwork for President Nixon’s upcoming visit to China. There are a number of U.S. congressmen, Democrats as well as Republicans who believe the current U.S. “One-China” policy should be changed.

The present U.S. policy was expressed in the statement of Thomas J. Christensen, Deputy Secretary of State for East Asian and Pacific Affairs, before the House Committee on Foreign Affairs Subcommittee on Asia, the Pacific and the Global Environment of March 27, 2007 [found here at http://www.internationalrelations.house.gov/110/chr032707.htm]:

“We [the US government of President Bush] remain mindful of our obligations under the Taiwan relations Act (TRA) to make available to Taiwan defense articles and services necessary for Taiwan to maintain a sufficient self-defense. We will continue to implement our successful and quite stabilizing one-China policy—based on the three U.S.-China Joint Communiqués and the TRA. We insist on peaceful resolution of cross-strait differences; we do not support Taiwan independence; and we oppose unilateral changes to the status quo by either side of the Taiwan Strait.”

No mention was made of the history of U.S.-Taiwan policy going back to 1971-1972 or the fact that the Shanghai Communiqué, which maintains that there is `One China' and that Taiwan is part of China,' was established without either the consultation of the U.S. Congress or the people of Taiwan.

Ms. Lin Xiuhe said at the Flushing meeting, “The U.S. government supports a One-China policy, but I’d like to remind everyone that the United States values democracy, freedom, peace, justice and human rights. Taiwan has a democratic and free system, while China is a communist country with much to be desired in human rights. There are still thousands of missiles aiming at Taiwan. The United States should work with the international community to take up the responsibility to protect Taiwan.”

Su Xiang, a typical young college student from Taiwan, expressed his concern over the U.S. foreign policy. He believes that China being an important trading partner,  gives it much more influence than Taiwan to U.S. policy, but that this is against the fundamental values of the United States. He hopes Senator Obama will  pay more attention to the voice of the Taiwanese people.

Wang Suhua also spoke of the common interest and values between Taiwan and the U.S. He said, “It would be in America’s best interest to have more democratic countries in the world. Though it has a democratic system, Taiwan has always been excluded from the Bush administration’s Southeast Asian strategy. I sincerely hope Senator Obama  would bring Taiwan back into the international community.”

Councilman Liu’s enthusiasm revived as soon as the three Taiwanese Americans finished  speaking. From time to time, he nodded with a smile to the other speakers and was quick in answering their questions and addressing their concerns.

Although Taiwanese politicians City Councilman John Liu and Assemblywoman Ellen Young appeared uninterested in Flushing, NY when three Taiwanese Americans spoke, there is a question of concern for the American people and their presidential candidates, this year, to discuss and decide regarding Taiwan and the Taiwanese people.

The U.S.-Taiwan policy has changed purely on the orders of several U.S. Presidents:
President Jimmy Carter in 1979 broke off formal diplomatic relations with Taiwan and terminated the Mutual Defense Treaty between the United States and Taiwan without consulting with or seeking the approval of Congress (known as seeking the advice or consent of the U.S. Congress, under the U.S. Constitution). The U.S. Congress did assert some authority, later that year, by passing the Taiwan Relations Act, which was an attempt to codify into law the basis for continued friendly relations between the U.S. and Taiwan, requires the United States "to provide Taiwan with arms of a defensive character," but does not require the U.S. to intervene militarily if China attacks or invades Taiwan.

In July 1982, President Ronald Reagan (known as a staunch anti-communist) issued “six Assurances” to Taiwan, including the assurance that “the United states would not formally recognize Chinese sovereignty over Taiwan.”

President Bill Clinton, who according to his friend and fund-raiser Charles Trie’s testimony to the FBI is alleged to have conducted a business deal that gave China equipment capable of producing deadly biological weapons, declared that the United States will “continue to make absolutely clear that the issues between Beijing and Taiwan must be resolved peacefully and with the assent of the people of Taiwan.”

In July 2002, the United States-China Economic and Security Review Commission reported to the U.S. Congress that “China is enhancing its capability to carry out attacks across the Taiwan Strait with its special operations forces and navy and missile forces.”

Thus, there is an important question, particularly in view of the 2005 so-called “Anti-Secession Law” enacted by China and its recent actions against the people of Tibet:

What should the United States do when China threatens to attack Taiwan, and what would the United States do if China were actually to attack Taiwan? Or, worded differently: Would the U.S. defend Taiwan in case of attack as, for example it may be expected to do if Israel were attacked? This is a question of concern for the American people and their presidential candidates, this year, to discuss and decide.