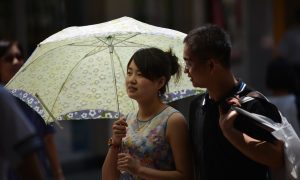 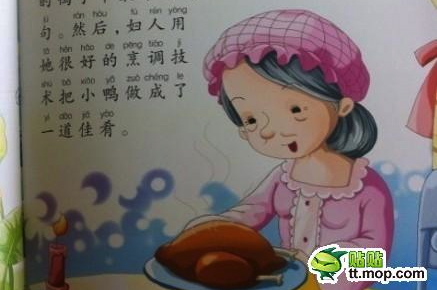 In this Chinese retelling of the classic tale, the ugly duckling doesn’t become a swan—he becomes a “wonderful dish.” (Mop.com)
China

To the dismay of netizens, the Chinese version of the fairy tale The Ugly Duckling ends in a tragic twist for the duckling.

Images of the storybook’s pages have been passed around on China’s social media Weibo and Mop and have become an Internet sensation.

In this version, a wise duck professor tells a family of ducklings the classic version of the tale, involving an ugly duckling who eventually grows up and realizes he is a swan. Upon hearing this, one of the ducklings gets to thinking.

Since he’s rather ugly himself, he decides that he must be a swan, too, so he runs away from his family to live alone. One day he falls asleep, and a lady catches him and brings him home.

“At home, the lady prepared to kill the ugly duckling,” reads a translation by Offbeat China. “The ugly duckling struggled like crazy. He cried: ‘Please don’t! I’m a swan!’ The lady didn’t understand a single word. She pressed him hard and killed him. ‘This is the most difficult duck I’ve ever handled,’ she murmured.”

“Then, using her excellent cooking skills, she made the ugly duckling into a wonderful dish.”

Netizens expressed disbelief over the dark ending of this children’s story, which the online media Shanghaiist calls a “very Chinese twist.”

“The darkest thing about this story is that it teaches kids not to be themselves and to follow the masses,” one netizen wrote according to Offbeat China.

“Dreams are killed at a very young age,” another netizen added.

Today, 90% of children’s stories in China are imported, according to Offbeat China. This version of The Ugly Duckling is one of the few that are not.