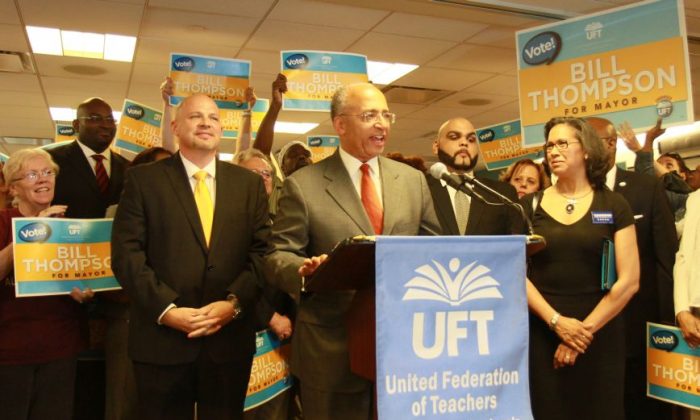 Bill Thompson speaks at the United Federation of Teachers' headquarters in Manhattan on July 19, after the union endorsed him for mayor of New York City. (Ivan Pentchoukov/Epoch Times Staff)
New York

The union followed a formal three-phase process, which culminated in a final vote by a 3,400-member delegate assembly. The vote was almost unanimous, according to UFT President Michael Mulgrew, and merely a formality as dozens of laminated signs with Thompson’s name were ready for the occasion.

“There were very, very few votes against the endorsement,” Mulgrew said, adding that the union was clear that it would make an endorsement in the mayoral primary election, and that Thompson was selected after an exhaustive process.

“When I’m mayor, I’m going to fight day and night to help the teachers of New York, because you’re critical to the future of New York,” Thompson said after the endorsement announcement at the UFT headquarters in downtown Manhattan.

In his speech, Thompson recalled his mother, who had been a UFT member and a public school teacher in New York City for decades. He said that the school system needs to move away from a focus on standardized testing, and that as mayor he will give parents a voice.

Immediately following the union’s announcement, more than 100,000 recorded calls began to go out to its members, urging them to get involved in the campaign.

With approximately 170,000 potential voters across the five boroughs, the UFT had not previously disclosed who it would endorse, although Thompson and Public Advocate Bill de Blasio had been the leading contenders. Thompson also received an endorsement from the Council of School Supervisors and Administrators on June 18.

During a June 17 press conference on graduation rates, Mayor Michael Bloomberg said the endorsement by the union would amount to “almost a kiss of death.”

“I don’t know what goes through voters’ minds, but if the UFT wants it, it ain’t good,” Bloomberg said.

Bloomberg added that former Mayor David Dinkins had been the last candidate endorsed by the UFT to win. The UFT has not endorsed a mayoral candidate since 2001.

The UFT has been without a union contract with the city since Halloween 2009. All of the city unions have been working under old contracts. Many have demanded retroactive pay, as well as pay raises. Citing no money in the budget, the Bloomberg administration has refused to budge.

“Our teachers deserve raises,” Thompson said. “The fact that they’ve gone four years without a raise is irresponsible on behalf of the mayor.”

In April, the Bloomberg administration offered the unions no retroactive pay and said they would need to pay a portion of their health care costs. The unions, including the UFT, scoffed, holding out for a new mayor. The next mayor is looking at a $7.8 billion tab to settle with the unions.