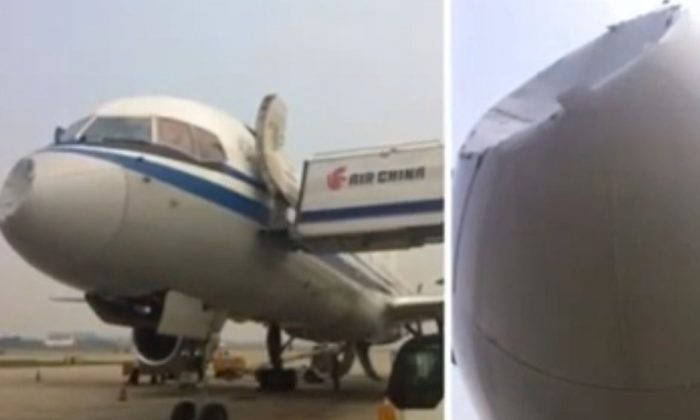 A YouTube screenshot shows the apparently dented plane.
Beyond Science

UFO Suggested as Cause of Air China Plane Dent

Photos have emerged showing a Chinese passenger plane with its nose dented, with some suggesting that a UFO caused it.

The Sun reported that the Air China plane, which was apparently damaged flying at around 26,000 feet above sea level, was forced to make an emergency landing after the denting. Officials have not elaborated on what caused the damage.

When the plane landed, it was discovered that the nose was dented.

Some suspect that it might have been an unmanned aerial vehicle but others aren’t so sure.

However, due to censorship in China, the cause won’t likely ever be revealed, he said.

“The only question is, will the notoriously secretive Chinese authorities reveal the truth about what happened?” he questioned

No passengers or crew were injured in the incident.

The report comes just days after an odd shaped object was spotted flying over a castle in the Netherlands.

A woman spotted the purported UFO, which had “S-shaped” fins,  hovering above a Medieval castle.

“The most interesting part of that, for me, is those fins are on the opposite side. At first, I thought the fin side must be a tail, but after looking at it from the second image, it almost looked like the fins were (at) the front and it was turning around and coming back into the frame,” the photographer, Corinne Federer, told the Huffington Post.

And earlier this month, it was reported that a UFO flew into a Mexican volcano.