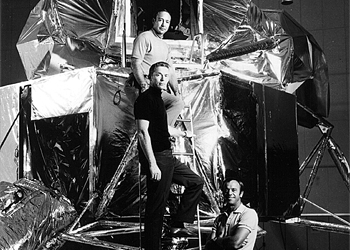 Apollo 14 Astronauts, (F–R) Alan B. Shepard, Jr., Stuart Roosa, and Edgar Mitchell stand on a lunar module mock-up in 1970. Edgar Mitchell told a UK radio that UFOs are real and that governments have been keeping it a secret. (NASA/Getty Images)
Beyond Science

James Burke
View profile
Follow
biggersmaller
Print
A veteran of the Apollo 14 mission has said that UFOs visit earth and have made contact with mankind.

Dr Edgar Mitchell, who in 1971 became the sixth man to walk on the moon, told British radio station Kerrang! on Thursday, July 24 that, “We have been visited on this planet and the UFO phenomenon is real, though it has been covered up by our governments for a very long time.”

“There’s more nonsense out there about [UFOs] than there is real knowledge, but it is a real phenomenon—it has been well covered up by all of our governments for the last 60 years or so but slowly it has leaked out—and some of us have been privileged to have been briefed on some of it.”

In the interview Dr Mitchell referred to the infamous Roswell incident of 1947 where it is believed by some that the U.S. Government covered up the crash and subsequent salvage of an alien craft.

“I have been deeply involved in certain committees and certain research programmes with very credible scientists and intelligence people that do know the real inside story and I am not hesitant to talk about it,” he said.

“There is quite a bit of contact going on—I can’t tell you because I don’t know all the extent of it, I don’t know all the inside details because that isn’t really my main interest—but we do know we have been visited, that the Roswell crash was real, and a number of other contacts have been real and ongoing…”

The main incidents, he said, have been taking place since World War Two.

Dr Mitchell said that public awareness of it is increasing and that there are fewer efforts by governments to cover up incidents or create misinformation.

“I think we are heading towards a major disclosure on this and serious organisations are heading in that direction,” he said.

He stated that well over 70 percent of the U.S. public believed as fact the visitation to earth by UFOs and that people on the inside who know of this information now feel less threatened in speaking out about what they know.

“You have seen some of the pictures—well, the pictures that I know of, some of them are these little people that look strange to us … from what I know from my contacts who have had contact that is pretty accurate,” he said.

Dr Mitchell is not the only former astronaut to come forward about UFOs.

Colonel Gordon Cooper, an astronaut in Project Mercury—the first U.S. manned-space effort, is on record saying he witnessed a formation of metallic saucer-shaped UFOs at high altitude over central Europe in 1951.

Seven years later Colonel Cooper had another experience when he oversaw the processing of film footage taken of a UFO saucer which landed on a dry lake bed in California. He said footage was sent to Washington and nothing of it was heard of again.

According to The Independent, Colonel Cooper gave testimony at a U.N. hearing on UFOs in 1978.