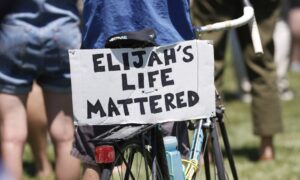 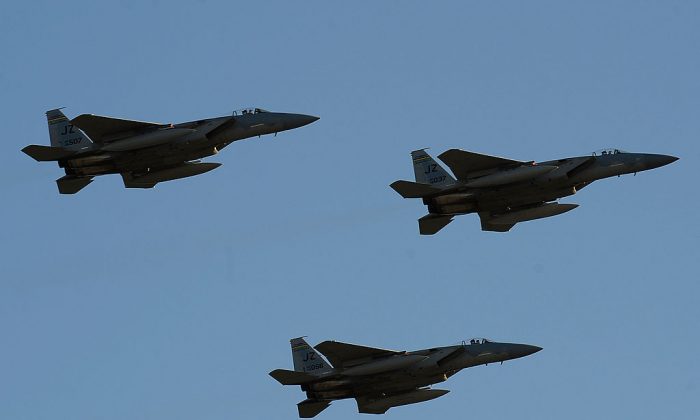 F-15 fighters were unable to locate the UFO over Oregon on Oct. 25, 2017. (Rusty Jarrett/Getty Images for NASCAR)
US News

On Oct. 25, 2017, a mysterious aircraft was spotted, in broad daylight, near a busy flight route over the state of Oregon. U.S. Air Force jet fighters were then launched to investigate. But found nothing.

Originally reported by The War Zone blog from auto news site The Drive, the unidentified aircraft was initially picked up on radar at around 4.30 p.m. The object was traveling at high speeds through Northern California at 37,000 feet, according to the site.

There was no flight path recorded for the aircraft, and it did not respond to radio calls. Neither did it appear on any nearby aircraft Traffic Collision Avoidance Systems.

The object then turned north and merged with nearby commercial air traffic, before disappearing from radar.

Shortly after, several pilots radioed into air traffic control to report sightings of a white aircraft flying at 37,000 feet, but at distance too far to make an identification. This occurred for a period of half an hour and over hundreds of miles.

US Air Force F-15 interceptor fighters were then scrambled from Portland. But despite their speed and radar capability, the fighters could not locate the mystery aircraft.

The Federal Aviation Authority (FAA), and the U.S. Air Force both confirmed to War Zone that the event did occur.

Recently, War Zone obtained, via a freedom of information request, audio recordings of radio transmissions and phone calls made by FAA staff during and after the event.

The recordings paint a fuller picture of what happened as authorities struggled to determine what they were dealing with.

In a recording after the initial spotting by air traffic control, a controller reported an object traveling “very fast at 37,000,” before remarking: “That’s crazy.”

When the F-15 fighters enter the scene, they can be heard calling air traffic control asking for an update. The controller responds that the aircraft “must be in stealth mode or something.”

Phone interviews with the pilots who saw the UFO conducted after the event provide further details about the craft.

The pilot of Southwest 4712 noted that he had not seen anything like this in his nearly 30-year flying career.

“If it was like a Lear [private jet] type airframe I probably would not have seen it this clear. This was a white airplane and it was big,” he said. And it was moving at a clip too, because we were keeping pace with it, it was probably moving faster than we were… It was a larger aircraft yeah.”

Online users on Reddit have speculated that the object may have been a drug smuggling aircraft or a secret military stealth plane. However, it was a test run for a new stealth craft, flying through a commercial carrier route during daylight hours would seem to be an odd move.

A news.com.au writer conjectures that Russia and China, which also have developed aircraft stealth technology, could also be capable of a flyover such as this.

Whatever theories we may have about the strange white aircraft, the recordings show that even the officials didn’t have a clue.