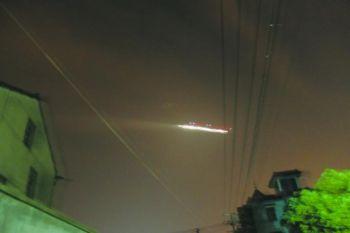 UFO Sightings on the Rise in China, With More Predicted

Michelle Yu
View profile
Follow
biggersmaller
Print
UFO sightings have increased in China, according to media reports. In a recent sighting, photography student Gu Peiwen closely examined a photo in his camera and shouted in disbelief: “I just caught aliens on camera!”

According to Shanxi News Net, it was near midnight on Sept. 22 as Gu and his friend were taking photos of the beautiful moonlight view of the ancient Pingyao City in north China’s Shanxi Province, when Gu noticed a bright spot in his photo. He first thought it was a star, but could not find a star in that position when he carefully looked back up into the sky. Enlarging the photo, Gu found the bright spot was a flat object with two flashlight-like beams behind it.

Excited, both students continued to take more photos, hoping to track the object, invisible to the naked eye. The photos showed that it had lingered for about 40 minutes.

The Pingyao UFO sighting was just the most recent of an array of sightings in China since June.

According to the Legal Evening News, flights were delayed due to a UFO that was spotted near the Beijing Capital International Airport at around 8 p.m. on Sept. 21.

In August, at least four Chinese cities reported UFO sightings, while between June 30 and July 15 at least nine sightings have been reported across the country, according to Chinese media.

Though UFO spotting is rarely reported in Chinese media due to rigid censorship strictures, the Chinese are by no means strangers to sightings. Shen Kuo (1031–1093), one of the great Chinese ancient scientists from the Song Dynasty (960-1279), recorded seeing a UFO in his Dream Pool Essays (Mengxi Bitan). Wu Youru, a Qing Dynasty (1644-1912) painter vividly depicted a crowd watching a “fire ball” flying eastward in Nanjing City.

While recent UFO sightings have received a lot of publicity, Chinese astronomy researcher Wang Sichao said in fact the number of major sightings this year is just a little higher than average.

Wang, a researcher from the Zijinshan Astronomical Observatory under the aegis of the Chinese Academy of Sciences, made the remarks in an interview with New Tang Dynasty Television.

Having studied UFO sightings for 39 years, Wang said major UFO sightings have occurred the most in years ending with 1, 2 or 7 since the 70’s. He predicted that more significant sightings may occur in 2011 and 2012.

“I’m convinced that there’s life out there in the universe, and I’m also convinced that some of that life is intelligent,” Pope said in an interview with The Epoch Times.

“If extraterrestrials were visiting the earth and interacting with humans, then I suppose that what they’re doing would be something similar to what we do,” Pope said. “After all when we study wildlife in the environment, we hide ourselves, we try not to interact with it. Sometimes we tranquilize animals, experiment on them. Sometimes we put a tag on them. So … maybe they’re just studying us.”