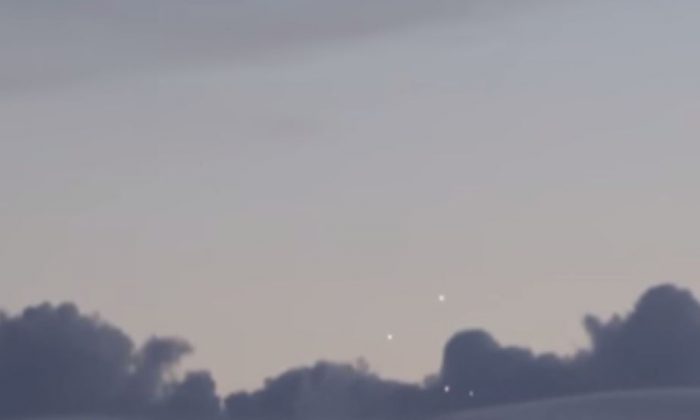 A witness in France claims to have spotted at least four “UFOs” above Paris, France, a few days ago. (YouTube/screenshot/User: WTFflow)
Science

Witnesses in France claim to have spotted at least four “UFOs” above Paris, France, a few days ago.

A user uploaded footage of the alleged UFOs on YouTube, describing them as “landing in clouds.”

The video, captured in November, appears to show four lights floating around in the clouds above the city.

The lights appear to be visibly moving.

The YouTube uploader describes his experience, claiming: “I caught a nice UFO fleet during a beautiful sunset the other day. The UFOs were kind of multicolored, I saw some red colors appearing at some point in the objects.”

“The fleet of lights were descending to reach the clouds, certainly to hide – but maybe it was another landing. I’m starting to see more and more UFO fleets these days! Two days earlier I saw a pretty stealth white orb fleet in the morning… it was too late to record.”

It appears there were no other videos uploaded from other YouTube users about the alleged UFOs in the clouds over Paris.

About a month ago, there were claims of UFOs flying near the Eiffel Tower in Paris.

According to the YouTube user who uploaded the video, “As the person recorded was focusing in on the group of friends enjoying themselves. These UFOs are fast flying and were only noticed by the person recording much later when viewing the video.”