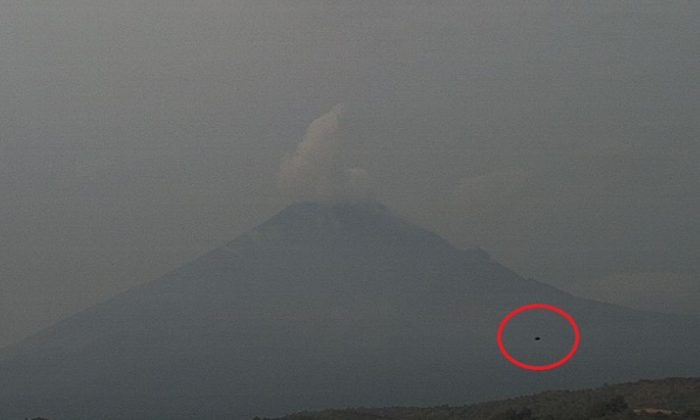 Another UFO was spotted near the Popocatepetl Volcano in Mexico this week.

Photos taken Dec.  12 were uploaded online, showing a dark circular dot near the mountain. They were then compiled and uploaded on YouTube.

It was noted by UFO Sightings Daily, a blog that keeps watch of sightings around the world.

“This extraordinary UFO was caught on the live cam of volcano Popocatepetl. Streetcap1 of Youtube found it. However the cam does not have live video, but instead only shows screenshots every 60 seconds. You can see the archived image yourself by clicking the link above. I checked the before and after photos in the archives, but its not there,” the blog states.

In late November, another unidentified flying object was spotted near Popocatepetl, which erupted in 2013, as seen below:

“The orb itself appears as a cloud and moves extremely fast. Its size is about that of a motorcycle, judging from the birds and the buildings. It looks like a fluffy white orb,” UFO Sightings Daily said a few days ago. The full video can be viewed below:

There has been numerous UFO sightings near Mexico’s volcanoes. About a month ago, an alleged “cigar-shaped” UFO was seen flying into a volcano.

A number conspiracy theorists have claimed that UFO bases are located inside or below the volcano.

While in June 2013, another alleged UFO went inside the Popocatepetl volcano.

At the time, the Huffington Post did an interview with Marc Dantonio, the chief photo and video analyst of the Mutual UFO Network, who said he believes that “this is not a likely fake. I think, for the moment, this is a genuine image capture.”