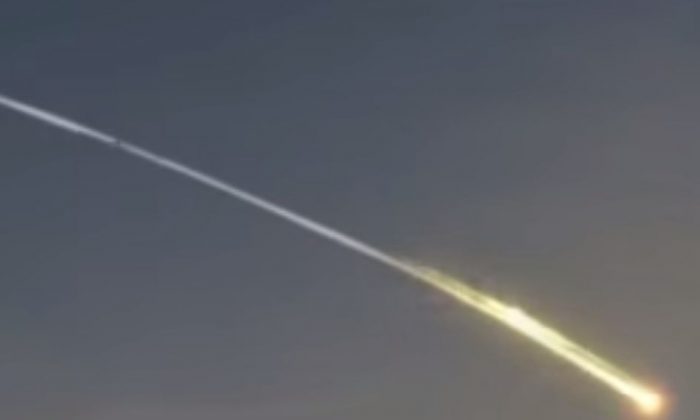 A bright fireball was spotted over Oklahoma City a few days ago and it was captured on video.

Some speculated that it was a “UFO,” but it was most lilkely a meteor.

The Weather Channel dubbed it a meteor, and it was captured on video Wednesday morning.

A number of people in Edmond and Oklahoma City said they saw it.

“Look what i was lucky enough to capture this morning. Flew right by and north towards Edmond,” said one eyewitness.

Another added: “Posting this a little late but I saw this flying through the sky this morning. Kind of cool and eerie at the same time.”

Added another: “Caught this when I was taking the garbage out this morning! I assume this is a meteor from the comet that passed by earlier this week?”

A few weeks ago, the Leonid meteor shower peaked–with up to as many as 15 per hour.

“Wednesday’s sightings marked the second time in just weeks that people in the Southern Plains reported seeing a large meteor. On Saturday, Nov. 9, the American Meteor Society received hundreds of reports of a ‘bright green light’ over the skies of San Antonio, Texas,” said the Weather Channel of the likely meteor.

But last year, a witness in Norman, Okla., claimed to have spotted a “boomerang” shaped UFO about 1,000 feet overhead with white lights.

“I looked up and saw a boomerang-shaped object less than 1,000 feet overhead,” the person said. “It had white lights in a V-shaped pattern on the wings. It moved slowly from east of where I was standing to west. It made no sound at all.”

According to a report from Examiner, Oklahoma has a higher number of UFO sightings nationally.