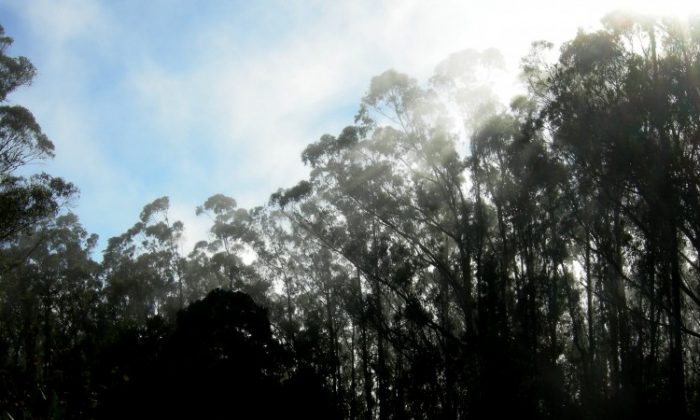 A view of Mount Sutro from Mount Davidson. (Courtesy of Lori D'Ambrosio)
US

SAN FRANCISCO—Whether or not Mount Sutro would be reduced to a third of its size was still unclear Tuesday night at a hearing in which crowds of nearby residents were in attendance at UCSF’s Parnassus Heights campus.

Named after San Francisco’s former mayor Adolph Sutro, who planted the non-native Blue Gum Eucalyptus trees there in 1886, the forest has a Permanent Open Space designation.

The draft EIR is required by the California Environmental Quality Act to examine the university’s “most aggressive management practice contemplated.”

“Under full or worst-case implementation of management activities under the proposed project, approximately 60% of all the existing trees, including large and small trees, could be removed from the Reserve, the majority of which would be small trees less than 12 inches in diameter,” the report description states.

This line in the executive summary has created panic among forest users and neighbors alike. A Save Sutro group already has nearly 2,000 signatures to petition against UCSF’s plan to cut 30,000 trees.

UCSF has said in an email to the neighbors a statement that the 30,000 number is misinformation and not part of the university’s plan, which has been communicated with the community since 1998 in the development of long-term goals to manage the forest.

Nevertheless, thinning the forest is part of the maintenance plan and it remains unclear how many trees will be cut.

“We worry that this plan, if it goes forward, provides a blank check for UCSF to proceed with dramatic changes to the landscapes,” one resident said.

Some residents attended the hearing to express their opposition to UCSF’s possible 30,000-tree removal plan, and others were there trying to dispel the idea that trees would likely be felled at that scale.

The trails used in the forest today and access to the top of the hill were made possible because of the UCSF’s maintenance, and residents who have been involved in earlier community meetings have supported the move to a final forest management plan.

Four project demonstration areas with different characteristics, totaling 7.5 acres, will tested by the university before determining what the best route of management will be.

The goals of the management plan include expanding native plant species, adding trails, and removal of hazardous trees near buildings and pavements.

One issue of contention is the use of herbicides to prevent re-growth. Herbicides are not currently used on the Reserve, but UCSF plans to test, in the demonstration areas in a total of 1-3 acres, spot-application as a re-growth control measure.

Another concern, and a reason given for the tree-thinning, is the possibility of forest fires. Residents opposed to the cutting of trees in the forest have reacted with much skepticism to this.

Stanford ecologist Joseph Mascaro wrote in a letter presented at the hearing that thinning the forest would instead create a drier climate and an environment more likely to cause fires.

One of the biggest concerns for neighbors is the possibility of spoiling the microclimate created by the forest. Some call it a cloud forest (which UCSF says it is not because the temperatures are not tropical or sub-tropical), filled with rolling fog, which is responsible for the sound damping and lack of wind to the surrounding neighborhoods.

The university was not permitted to comment at the time, and public comments would only be responded to after the hearing period, which ends Mar. 4, and kept on record in the final report.