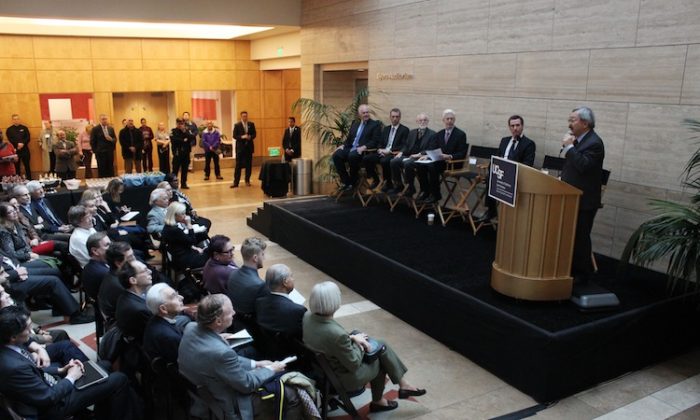 UCSF Mission Bay is home to the California Institute for Quantitative Biosciences (QB3), which currently hosts 37 bioscience startups. Entrepreneurs rent working space on campus and have access to the University’s facilities. (Catherine Yang/The Epoch Times)
US

SAN FRANCISCO—City leaders celebrated the 10th anniversary of the “Silicon Valley of Bioscience” on Wednesday at the University of California San Francisco Mission Bay bioscience hub.

“Designed from the ground floor as a center for collaboration and discovery, Mission Bay is at the very heart of what makes San Francisco the Innovation Capital of the World,” said Mayor Ed Lee.

The bioscience hub hosts nearly 4,000 UCSF researchers, clinicians, and staff, and is the epicenter of a collaborative ecosystem of 50 bioscience startups, 9 established pharmaceutical and biotech companies, 10 venture capital firms, and the California Institute for Quantitative Biosciences (QB3).

Mission Bay enables anyone with a credit card to rent space for their bioscience startup—a valuable asset to aspiring entrepreneurs.

Entrepreneurs are trying to change the world in a room where two different companies share the same tiny desk—this is the startup incubator of the bioscience hub, said Douglas Crawford, associate director of QB3.

“It’s relatively large now, we’re at eight people,” Kapp said. “When we started we were at two people. … There just aren’t [many] spaces where you can rent 200 square feet, get started, grow, generate that initial data that helps you grow to eight people.”

Omniox has been at QB3 for 3.5 years and is developing a drug to improve the efficacy of radiation treatment for cancer patients. Kapp says the government has been very supportive in terms of both funding and advice.

The UCSF bioscience hub currently hosts 37 startups, and Crawford says it’s the environment that really pioneers the innovation, with an ecosystem of many small companies that are better and more adaptive at what they do.

The traditional system has been for ideas coming from universities to gain grants for research, but “almost all ideas emerging from the university fail to raise that sort of capital; that capital is getting increasingly scarce,” Crawford said.

“Is everything that fails to get that capital not of value? So this was an experiment to see,” he said.

uBiome, a small startup at the incubator, is a citizen science project aimed at helping the public access “cutting edge sequencing technology to understand their health through the microbiome,” according to its crowdsourcing introduction. Bioscience startups rarely raise over $20,000 in crowdsourcing, says Crawford, and the entrepreneurs working on uBiome at QB3 were not sure that was even an attainable cap.

“They said, ‘We’ll go for broke,’ and set the goal at $100,000,” Crawford said. The project, which sends participants a kit to swab the affected area, sends back a link to microbiome data and scientific studies relevant to the participant’s profile. It has, to date, raised $160,313, with eight days left on Indiegogo, a grass-roots crowdfunding website.

The goal, according to Crawford, is to create an environment where “20-something-year-olds say, ‘Hey, I have a credit card, I could start a company that will ultimately help people change the world.'”