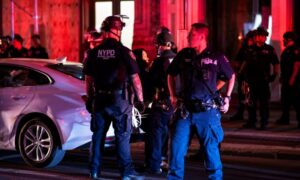 Demonstrators face-off with officers in front of the San Diego Police Department in downtown San Diego, Calif., on May 31, 2020 (Ariana Drehsler/AFP via Getty Images)
Southern California

Students at University of California San Diego (UCSD) are demanding passing grades on their final exams, claiming that recent unrest over George Floyd’s death has made them unable to focus on their schoolwork.

“Please do not force students that are paralyzed by the current events to disengage in their political environment. Please do not prioritize students’ exams over their mental and emotional health,” reads a sample letter that’s been circulating among UCSD students who wrote to university administrators for a “modification in the grading and the final exams,” preferably a universal pass.

“Beyond it being inherently insensitive to force students, especially our black students, to hold the burden of maintaining their academic readiness in these horrific times,” the sample letter continues. “It is blatantly negligent to the severity of these events and their influence over one’s mental health and academic performance.”

Unlike UC Berkeley and other schools in the UC system, UCSD did not shift its grading system to pass-fail options for the pandemic-interrupted 2020 spring semester. The university adopted a policy that allows each academic department or program to decide whether to give students a pass-fail grade or an actual letter grade.

A student who emailed the letter to school officials told student newspaper The Guardian that she has been too occupied with #BlackLivesMatter activism to prepare for her finals.

“I personally have been exhausting so much energy simply using my platform, researching, donating, having hard conversations, empathizing, and grieving to even focus on my classes and have to catch up as we speak because the past week has been excruciating,” she said.

UCSD is not the only institution where student activists have called for administrators to take steps in response to the George Floyd protests, which have sometimes become violent. At the University of Minnesota, student-led “Gets Cops Off Our Campus” rallies have asked the school to reduce ties with the Minneapolis Police Department (MPD). In response, the university said it would no longer contract the MPD for additional support at large events, such as football games, concerts, and ceremonies, and will not use the MPD for specialized services, such as K-9 explosive detection units.

In a similar manner, the student government at Ohio State University is demanding that the school sever ties with the Columbus Police Department, after officers responded with force when weekend protests escalated into riots, leaving widespread damage to public buildings and private businesses. Multiple officers were injured after rioters threw bricks and rocks.

“Our city is burning, our students are hurting, the safety and wellbeing on the Black community is at inherent risk and there is no other time to act than now,” the students wrote in their petition.