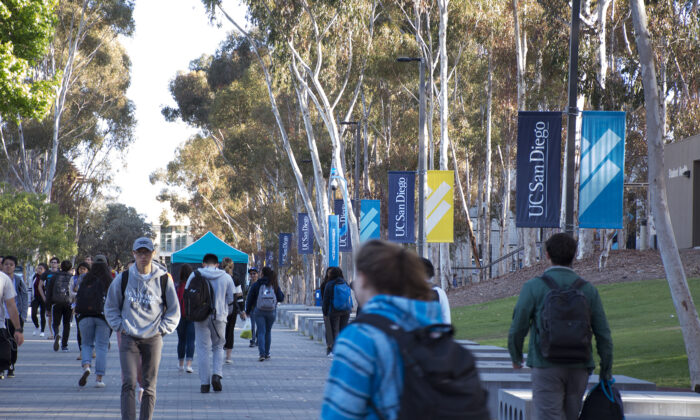 SAN DIEGO—A 25-year-old graduate student accused of trying to grab a California Highway Patrol (CHP) officer’s gun during an altercation on Interstate 8 in Mission Valley, leaving the lawman shot in the leg, pleaded not guilty by reason of insanity on May 10 to charges that include attempted murder of a peace officer.

Yuhao Du, 25, is accused of lunging for CHP Officer Antonio “Tony” Pacheco’s service weapon on April 27, causing the gun to fire as the two men grappled over the pistol.

The events that led to the shooting began at about 6:15 p.m., when Du, a graduate student studying physics at the University of California–San Diego, crashed his vehicle on eastbound Interstate 8 near the I-805 overpass, according to the CHP.

A short time later, Pacheco pulled over alongside the freeway at the site of the wreck and contacted Du, who was standing in the center-median area, CHP spokesman Jake Sanchez said.

As Pacheco was speaking with him, Du allegedly attacked him without warning, “lunging for his service gun” and “trying to take control of it,” Sanchez said.

The gunshot injuries suffered by Pacheco, who has two young children and whose wife, Janette, is pregnant, will require “a lengthy rehabilitation and potential surgeries,” according to a GoFundMe.com page seeking donations to help the family with expenses during his recuperation.

A message dated last week on the page states that Pacheco was initially released from the hospital, then re-admitted due to “serious complications from the gunshot wound.”

Along with attempted murder, Du is charged with felony counts of assault on a peace officer with a semi-automatic firearm and removing and taking a firearm from an officer.

He remains in custody without bail. Following his plea on the morning of May 10, the next steps will involve having him examined by doctors.

One of Du’s attorneys, Anna Demidchik, said the plea was “a difficult decision for us to make.” The attorney said the decision was discussed “extensively with Mr. Du, but we believe that under the circumstances, it’s the best way to go.”

With Demidchik translating, Du’s mother, Xiugin Li, made a statement outside court after her son’s arraignment, in which she said, “We really hope that Officer Pacheco can recover as quickly as possible. What happened must be extremely traumatizing, not just for the officer … but also for his family.”

Li said she recently traveled to San Diego from China “to support my son during this trying time.”

She said, “Yuhao has always been a very good, responsible, and hard-working kid … It breaks my heart to see him in this situation. But I trust the American justice system to get to the bottom of the problem and to find the right resolution.”

Regarding the specifics of the case, Demidchik reiterated statements she’d made at Du’s prior court appearance, in which she said videos on social media have shown what happened in the aftermath of the incident, but not the event itself.