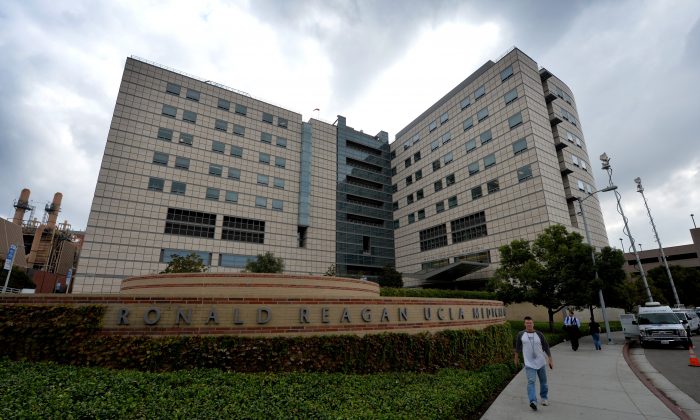 LOS ANGELES—One of the nation’s top hospitals, the UCLA Medical Center, has chosen to partner with a hospital directed by a Chinese physician suspected of mass murder.

UCLA Medical Center hospitals consistently rank among the top in the nation. U.S. News & World Report ranked its Westwood and Santa Monica hospitals No. 1 in California and No. 5 in the nation for 2016-2017.

The director of the Chinese hospital is Dr. Zheng Shusen, a transplant surgeon who is an alleged perpetrator of forced, live organ harvesting, according to a U.S.-based NGO that collects data from hundreds of Chinese hospitals where organ transplants take place.

Organ harvesting as practiced in China involves killing prisoners to provide organs for transplantation. Researchers believe that in China hundreds of thousands of prisoners of conscience, who are not guilty of any crime, have been killed in this way and comprise the primary source of organs. Death row prisoners have also been used for their organs, a practice that Chinese officials admit to.

In a report from Chinese state-run Xinhua News Agency, Zheng stated that the agreement between his facility and UCLA “will utilize medical resources and experience from both of its founding institutions.”

In August 2011, two Chinese liver surgeries were broadcast live to U.S. surgeons. Chinese surgeons are often eager to impress their U.S. counterparts, a sentiment that is often demonstrated in the tone and nature of coverage of such interactions in the Chinese press.

The American doctors indeed seemed enthused. Ronald Busuttil, founding Chief of the Division of Liver and Pancreas Transplantation at UCLA, described the procedures as “perfect” according to an article in CRI English, which belongs to state-run China Radio International.

Then, only two months later in October 2011, Zheng was awarded the title of “Adjunct Professor” by UCLA, which was the first time a medical honorary professorship was granted to an individual from China.

In May 2012, Zheng was awarded the title “Distinguished Professor” by UCLA, which is the highest honor bestowed by UCLA for professors, according to Zhejiang University’s website.

On paper, Zheng has outstanding achievements.

After studying transplant surgery in Hong Kong for two years, in 1993, he performed the first liver transplant of Zhejiang Province at the First Affiliated Hospital of Zhejiang University.

In 2001, Zheng joined the Chinese Academy of Engineering, an elite group of individuals recognized by the Chinese government in fields of engineering and medical technology.

The Ministry of Health Multi-Organ Combined Transplant Key Laboratory at Zhejiang University was established in March 2001, and Zheng assumed the role of director.

Zheng is a renowned liver transplant expert  in China, and a pioneer of the “Hangzhou Criteria” for selecting liver cancer patients for transplantation. The development of this standard in 2008 expanded the pool of potential liver transplant recipients by 52 percent, an indication that China had an abundance of livers to go around.

This is despite the death penalty figures having plummeted due to an important judicial reform the year prior. China says that nearly all its transplant organs have come from death row — a claim that is at odds with actual transplant trajectories.

A closer look at the number of organ transplants in China has led to some investigators questioning the organs’ sources.

Why the spike in organ transplants in 1999?

David Kilgour, a retired Canadian Member of Parliament and Secretary of State (Asia-Pacific), and David Matas, an international human rights lawyer, note in their 2006 investigation into allegations of forced organ harvesting in China that 1999 was the year the Chinese regime began persecuting practitioners of Falun Gong, a spiritual practice that had attracted over 70 million Chinese, according to government estimates.

Kilgour and Matas’ seminal report, “Bloody Harvest,” examines over 50 items of evidence that, when considered collectively, they say supports their conclusion that large numbers of Falun Gong prisoners of conscience have been murdered for their organs.

Zheng was the “leading surgeon” in nearly 2,000 liver transplant surgeries as of July 2016, according to his hospital’s website. He is on a list of nearly 10,000 medical personnel in China suspected of forced organ harvesting compiled by the World Organization to Investigate the Persecution of Falun Gong (WOIPFG).

In August 2016, The Transplantation Society (TTS), the leading global professional association in the field, hosted a conference in Hong Kong.

A seminar was held Aug. 18 in which Chinese transplant surgeons lectured about promised reforms they made in transplant protocol. According to an attendee of the seminar, Zheng was scheduled to speak about “a new era of liver transplantation” in China, but on the program he was replaced by another surgeon, Sun Xuyong.

Zheng nevertheless took to the podium. After returning to his seat, he soon walked out of the conference.

When all the speeches concluded, Dr. Jeremy Chapman, chair of the program committee and former president of TTS, said, according to an attendee, “Someone who presented here today presented research that included data from executed prisoners. We will report him to the Chinese government; he will never present at a TTS conference again. The TTS is serious about this.”

Although it’s unclear precisely why Zheng’s invitation to speak at the seminar was removed, an earlier report from Epoch Times suggests that it might be due to his affiliation with a regime apparatus used to persecute Falun Gong.

Zheng is chairman of the Anti-Cult Association of Zhejiang Province. The Chinese regime established the association to vilify Falun Gong practitioners and incite public hatred towards the group, according to Chinese Communist Party and other official documents.

Records show that Zheng was an active participant. He gave speeches and even lectures at educational events aimed at slandering the practice.

The sudden boom in organ transplants wasn’t isolated to Zheng and his team at First Affiliated Hospital of Zhejiang University. It is a phenomenon that has swept China since 1999.

China’s official transplant numbers are 10,000 annually, second to the United States, which conducts 28,000 to 30,000 transplants per year, according to the U.S. Dept. of Health and Human Services.

A 2016 report by Kilgour, Matas, and the researcher and author Ethan Gutmann, “Bloody Harvest/The Slaughter: An Update,” provides evidence that the actual rate of transplantation in China is much higher than the official rate. The report examines transplant programs in hundreds of Chinese hospitals and draws on media reports, medical journals, hospital websites, official propaganda, and websites that have since been deleted but are saved in archives.

According to the “Update,” China has been transplanting between 60,000 and 100,000 organs per year each year since 2000. Because of the inefficiency of the Chinese transplant system, in most cases one organ transplanted is believed to represent one victim killed.

In the United States, the average waiting time for an organ is between several months up to five years. China, however, has a waiting time that spans just days and weeks.

In an April 20, 2014 recorded phone call with an investigator posing as a patient’s relative, Zheng told the investigator that he could provide a matching liver for the recipient in one to two weeks.

Zheng co-authored an academic, medical article stating that between January 2000 and December 2004 he conducted 46 emergency liver transplants, in which recipients received organs within one to three days.

According to experts, the extremely short waiting period indicates that a living pool of blood-typed, forced donors is available.

Another key factor in China’s transplant industry that has alarmed doctors and researchers is its absence of an effective donor system.

Organ donation in China has been virtually non-existent.

Zheng himself remarked in a March 13, 2012 interview with Sohu Health, that: “Our country has been lagging behind in organ donations. Since the Ministry of Health and China Red Cross [not the international institution] started the project of ‘Organ Donation After Cardiac Death’ in 2010, there have been about 200 donations.”

UCLA Medical Center recently stated that national transplant leaders at UCLA and elsewhere have established clear expectations that organ donations in China comply with international standards, and that these hospitals have agreed to comply with those standards.

In June 2016, the House of Representatives unanimously passed H. Res. 343, a bill condemning China’s practice of forced organ harvesting of Falun Gong practitioners and members of other religious and ethnic minority groups. It also calls on the U.S. medical community to help raise awareness of unethical organ transplant practices in China.