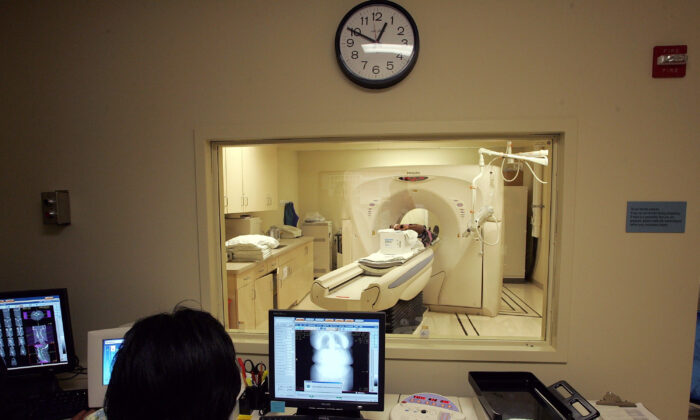 In this file photo, a CT tech looks on as a breast cancer patient, who is participating in a clinical trial, runs through a CT scan, in San Francisco, Calif., on Aug. 17, 2005. (Justin Sullivan/Getty Images)
Southern California

LOS ANGELES—There is a promising new drug in the arsenal of doctors treating women with HER2 positive metastatic breast cancer, according to results of a study at the UCLA Jonsson Comprehensive Cancer Center released on Sept. 18.

The HER2-targeting antibody drug conjugate trastuzumab deruxtecan (T-DXd) significantly prolongs the length of time the disease is controlled and cancer growth is halted when compared to the current standard of care, trastuzumab emtansine (T-DM1), said researchers at the Presidential Symposium at the European Society for Medical Oncology Congress (ESMO).

“It was a really substantial difference in the two treatment arms,” said senior author Dr. Sara Hurvitz, director of the Breast Cancer Clinical Research Program at the UCLA Jonsson Comprehensive Cancer Center. “This data is nothing short of phenomenal and will be practice-changing.”

T-DXd is comprised of a HER2-targeted monoclonal antibody that delivers high concentrations of chemotherapy directly to cancer cells that have HER2 on their surface.

Patients who received the drug had a 72 percent improvement in progression-free survival compared to T-DM1.

The disease did not progress within 12 months for 76 percent of patients who were treated with T-DXd, meaning their disease remained under control. That compared with only 34 percent for patients treated with T-DM1.

The so-called DESTINY-Breast03 trial included 524 patients randomized to receive treatment with either T-DXd or T-DM1. Median age of participants was 54 and ranged from 20-83. All were previously treated with trastuzumab and chemotherapy before starting the clinical trial.

Along with a longer progression-free survival, almost 80 percent of patients treated with T-DXd saw their tumors shrink compared to only 34 percent treated with T-DM1. And 16 percent of T-DXd-treated patients had their diseases completely disappear, cancer center officials said.

The next step is to study T-DXd in the frontline metastatic setting and in early stage disease. Hurvitz is investigating how well T-DXd works alone or in combination with anti-estrogen therapy, in treating patients with HER2 low, hormone receptor positive breast cancer.