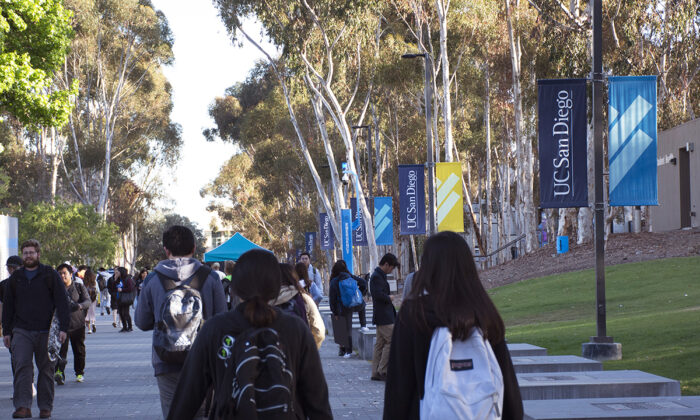 Students walk between classes at the University of California–San Diego in San Diego, Calif., on May 15, 2018. (Yang Jie/The Epoch Times)
Southern California

UC Seeks to Increase Enrollment for Californians by 23,000 Students in 8 Years

The University of California (UC) Board of Regents on July 21 discussed developing a plan within the next year to add more than 23,000 slots for undergraduate and graduate students from California by 2030.

A working group of UC chancellors and leaders was established last year to develop a strategy to meet enrollment growth goals and outlined two possible courses of action, according to UC President Michael Drake.

“Our goal all along has been to grow in a way that serves the state of California and meets its future education and workforce needs, while being responsive to each of the communities we call home,” Drake said at the meeting.

“Both options will require significant capital and infrastructure needs including new classrooms, new teaching labs and student and faculty housing. They also take into account enhanced use of technology and other non-traditional means of increasing enrollment,” Drake said.

In order to achieve the goal, UC will focus on increasing online and summer programs, since many campuses are unable to add more students on campus. Approximately 15 percent of the proposed undergraduate growth will be through summer programs and the same percentage through online enrollment, according to the plan.

At the meeting, UCLA Chancellor Gene Block said that UCLA is at maximum capacity for on-campus students, but there are some opportunities for the school to grow.

“We’re at maximum physical capacity right now. I can’t imagine putting any more students per square meter on our campus at any one time, but that’s the key—any one time,” Block said.

UC Irvine, UC San Diego, and UC Santa Barbara are proposing to have half of their summer students online by 2030, according to the plan.

UC also plans to use other tactics including study abroad and travel study programs to expand its enrollment capacity. A satellite campus would be another option, according to officials.

“We have a couple of really interesting opportunities. We’ll see whether they come to fruition but the possibility of bringing a small campus into existence in the L.A. region would be very attractive for us,” Block said.

He added, “We also have a new program we’re developing called ‘UCLA in LA’ which can provide students an opportunity to work and participate in internships.”

The proposed expansion plan came after UC saw surging enrollment demand starting in 2021. This year, the school system received a record high 251,179 applications for fall 2022, including 40,339 transfer applications and 210,840 freshman applications, according to UC’s application data.

However, the number of applications has far exceeded enrollment capacity, since most campuses’ acceptance rates are below 50 percent.

A previous version of this article did not clarify that the enrollment growth is planned for students from California. The Epoch Times regrets the error.