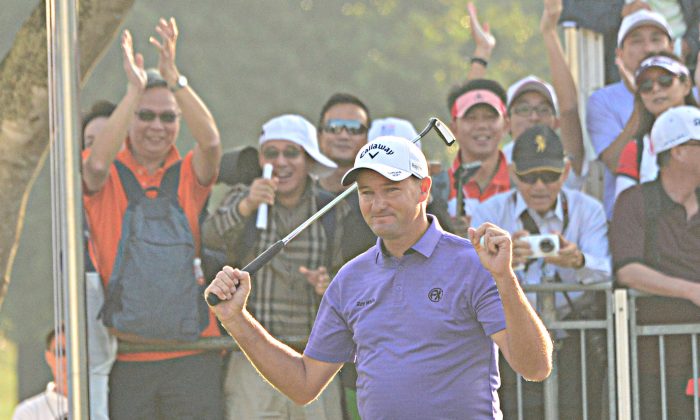 HONG KONG—From a spectator’s prospective, this year’s UBS Hong Kong Golf Open can only be summed in one word, “Phenomenal” and you may be wondering, why did I capitalise the letter ‘P’? That is a salute to the quality of the field as they literally fought to the bitter end for the champion’s crown.

As a sports’ photographer, I made my walk around the course and I went hunting for the usual tee off areas, off onto the long stretches of fairways, looking for bunkers and other hazard shots as well as the greens for the celebratory ball sinking’s.

Midway through the day, viewing the leaderboard, it looked like the battle for honors was down to seven players, but it seemed I was wrong.

Two hours later, it seemed the field had decided to take on a life on its own and I made the decision to find a good vantage spot at the last hole.

Getting to the 18th hole was easy enough, it was finding a perfect vantage spot that was the hard part, as I had to tussle with golfing fans, the setting sun, and make sure I was able to get the players’ face reactions as they took their ball sailing over the water hazard and onto to the green to sink, in their quest for either a birdie or par or the least of their worst.

The magic began, as I watched the top 11 players from the 17th hole, edging each other for the leader position and just as quickly, one by one, scores were reduced, the closer they reached the 18th tee.

The reducing number of players remaining on-course began to unfold, revealing the mounting pressure imposed until the last flight of players kept the spectators spellbound, including the assembled news crews, the many dignitaries on hand, ready to applaud and eventually crown the winner.

The setting sun cast its longer shadows, as the players list reduced, much to relief of the many journalist, be it electronic or otherwise as all had to meet their respective deadlines until it was down to Spain’s Rafa Cabrera Bello and Australia’s Sam Brazel with both landing their shots on either side of the hole on the green but as in any sporting activity there can only be one winner and that was to be the Brazel and by a single shot……. simply an amazing day.

Hong Kong golf needs more competitive Opens like the one.