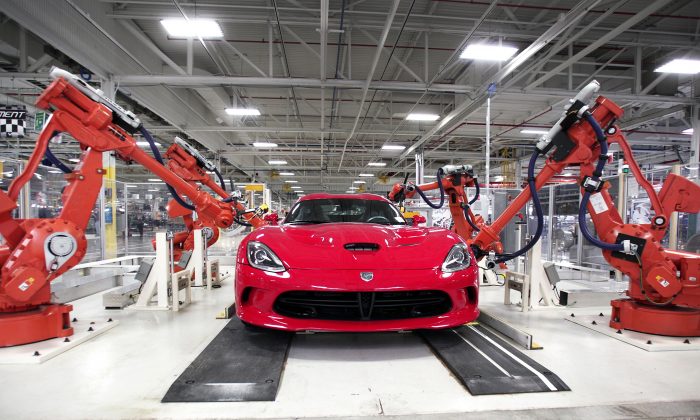 A Dodge Viper undergoes a test at the Flushing Gap Cell area at the Viper Assembly Plant May 8, 2015 in Detroit, Michigan. Bill Pugliano/Getty Images
Viewpoints

As global industries—particularly Western industries—move ever closer to the near-full automation of labor, Silicon Valley is faced with the dilemma of how to provide for the ongoing financial needs of the hundreds of thousands of people expected to be permanently displaced from the eventual (near) jobless manufacturing and service sectors of Western economies.

Among the very few possible solutions, the one they find to have particular potential is a so-called Universal Basic Income (UBI).

Is UBI just another form of charity? UBI is kind of like a monthly Social Security check for non-retirement-aged people who have been permanently displaced by the automation of labor. Unlike Social Security, UBI is expected to be a living wage, and, for the permanently displaced worker, it’s to replace work as the primary means of financial support.

The idea of UBI is not a new one—in fact, variations of UBI programs are already being experimented with, or fully implemented, in such diverse countries throughout the world as Finland, most recently, and for a much longer period in Saudi Arabia, where the persistently low oil price is currently exposing some of its weakness.

Many smaller experiments with forms of UBI are also being conducted at state and local levels, such as in Canada, Brazil, India, Kenya, and Uganda, and some experts consider the Permanent Fund of Alaska to be an example of a successful form of UBI.

Whether a UBI is the 21st-century answer to the 21st-century problem that U.S. workers face with the development of full automation is not the topic of this essay. Instead, the focus is on the opposing players in this drama: men and machines—how they are the same and how they are different; how they work together and, more importantly, how they will work apart.

Before government policymakers and industry experts begin sharpening their pencils or doing the math, before the pundits begin the debates, either extolling or condemning the particular virtues of UBI—of how it will or won’t make men lazy, or offer, or not offer, an unprecedented opportunity for the post-modern, post-worker, in his newfound freedom from work, to pursue without want or need, personal, civic, and societal enrichment at levels never before thought possible under the archaically time-intensive constraints of the traditional method of clock-punching—UBI planners and pundits should first consider some simple, even if subtle, inescapable truths about men and machines.

When there is work to be done, men and machines are always ready to do it—that’s mostly where the similarities end.

Men do feel, and most men usually do need to work, even when they don’t feel like it. And even the few who don’t need to work will still feel an inherent need to work for work’s sake; otherwise, they will feel they have no purpose.

When there’s no work, men are sent home; machines are powered down and remain on the job site.

An idled machine may realize efficiencies for an economy, even for the environment, by some cost-savings in electric generation, but an idled human being doesn’t.

An idled machine will experience less wear and tear, and here, too, a cost-saving over time in repair and maintenance, and maybe even its life expectancy will increase some; not so for idled men.

But, an idled machine doesn’t realize it’s not working, nor does it experience a void in its life that work once filled. Man does realize and experience that.

An idle man quickly becomes restless physically and mentally. His body and spirit become less fit, morose. His waistline increases and his general health declines, as does his self-image and self-respect. His self-pity doesn’t decline. His free-time freedoms will not lead to his becoming more involved in civic and social pursuits, for they, too, have become fully automated or obsolete, so more often than not, it will lead to his becoming more reclusive, and more removed from civil society—and more in need of its social services.

It’s true what’s often said about a man’s work being his identity. It’s also true, what’s less often said, that without work a man cannot be himself. Neither does he know himself, nor recognize himself. Nor can he do what he is meant to do, made to do, until all he can do is obsess about who and what he once was and did—and anguish over what to do instead.

The ultimate toll that idleness takes on his body soon takes an even greater toll on the resources of the physical and mental health care systems, and on a government already straining under the weight of its burgeoning social services, legal, and penal systems, its own under-funded defined benefit pension plans, and from administering, if not yet underwriting, UBI.

A UBI begs the questions: Is it a humane humanitarian enterprise, and is it right for the United States? Is it feasible and sustainable, or will it ultimately become as futile as trying to find the job it’s meant to replace, and as underfunded as the worker whose job it has replaced?

On the purely human level, for a UBI to be humane, it must appreciate man for the riddle he is. If a UBI is to work, it must work hard to re-work the un-working, so that which works within him to cause his inner need to work ceases to work. This may be the greater riddle. Otherwise, he will forever be unhappy not to be working and always on the verge of madness.

Still, this is something a UBI can hardly be expected to do, and it’s not hard to see how and why all this hard work quickly becomes unworkable. Even if it were workable, is this dehumanizing of man the most humane way to help him, or is UBI merely a post-modern-day version of the lobotomy?

If UBI is to be financially feasible and sustainable on such a massive scale, planners will first need to create an affordable, reliable, and permanent source of its funding. And this may prove to be challenging.

So what’s to be done? Does there lie somewhere within all this rhetoric, tired platitude, and clever prose, an answer? Is there no other option than to replace work with a UBI, or for companies to stop innovating and developing all these job-eliminating technologies? I don’t know or have the answer to this question and the reader won’t find it here. Ultimately, it will be for the American people to decide as a matter of public policy which option is the more positive and which the more negative.

However, I can point out just what may be the grand irony about work: It takes a lot of work to both create the problem and to provide the solution to any of its effects. And, too, it would be just as inhumane and as futile to try to stop its further innovation as it is to continue further along this path to its full automation.

Man must work; man must create, for work’s sake.

Paul C. Binotto is a freelance writer from Pittsburgh. He makes observations generally on society and culture, politics and jurisprudence, natural law, and natural rights.