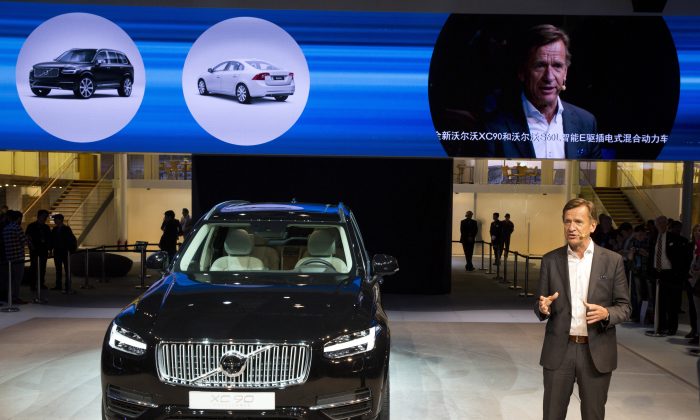 The deal announced on 18 Aug. is part of a series of initiatives by the ride-hailing giant to develop self-driving taxis. The goal is to replace its more than 1 million drivers with autopilots in the long term.

Uber’s effort to develop its own driverless technology began last year when it recruited hundreds of engineers and robotics experts from Carnegie Mellon University’s robotics and engineering center. The ride-hailing giant also announced it would deploy self-driving cars in Pittsburgh to test its driverless technology, starting this month.

“Pittsburgh could see some robotaxi tourism,” said Bryant Walker Smith, an assistant professor of law at the University of South Carolina, who specializes in autonomous vehicle regulations.

An important caveat is that these vehicles will still have human drivers behind the wheel.
— Bryant Walker Smith, assistant prof., University of South Carolina

As a part of the recent deal with Volvo, Uber will receive a total of 100 specially modified SUVs by the end of this year, according to a Bloomberg report.

“An important caveat is that these vehicles will still have human drivers behind the wheel, so the experience for the backseat passenger will be pretty similar to an Uber ride today,” Smith stated in an email.

“Still, it’s a good thing that the general public can start to experience these vehicles from the inside,” he wrote.

Uber and Volvo will work on a long-term joint project where Volvo will manufacture new base vehicles with autonomous driving (AD) technologies and Uber will be able to deploy its own AD systems in Volvo vehicles, according to a press release.

Uber will use the Volvo vehicles as self-driving taxis. And Volvo will use the same base vehicles to develop its own autonomous car strategy.

“Over one million people die in car accidents every year. These are tragedies that self-driving technology can help solve, but we can’t do this alone,” said Uber’s CEO Travis Kalanick in the press release.

“That’s why our partnership with a great manufacturer like Volvo is so important. By combining the capabilities of Uber and Volvo we will get to the future faster, together.”

Volvo has a high credibility in safety features, according to Kalanick.

Uber has been remarkably candid about its desire to eliminate its drivers’ jobs.
— Bryant Walker Smith, assistant prof., University of South Carolina

Swedish carmaker Volvo was acquired by China’s Zhejiang Geely Holding Group in 2010. The Chinese group is one of the more aggressive automakers in developing and supporting AD technology, according to a Wall Street Journal report.

The deal with Volvo is not exclusive, however. Uber can form partnerships with other carmakers as well.

“Uber has been remarkably candid about its desire to eliminate its drivers’ jobs. This could mean significantly cheaper travel for the public in the future (a societal good) but will also be disruptive to individuals and industries in a way that will require public planning,” Smith said.

Both Uber and Volvo see the project as a significant step in the automotive industry: A traditional carmaker joins forces with a Silicon Valley startup to stay ahead in the self-driving technology race.

“This is not the first time Detroit and Silicon Valley are partnering up and I don’t think it will be the last either,” said Nidhi Kalra, a senior information scientist at RAND Corporation, a U.S. think tank.

In May, General Motors invested $500 million in Uber’s rival Lyft, which plans to test the driverless Chevrolet Bolt taxis next year, according to a Wall Street Journal report.

In April, Ford and Google also teamed up to promote regulations that support autonomous vehicles.

On 18 Aug., Uber also announced the acquisition of Otto, a tech startup founded by former Google car engineers. According to media reports, the estimated price of Otto was $680 million.

Otto develops a self-driving kit for trucks, which is being tested on San Francisco highways. With this acquisition, the ride-hailing giant aims to launch an Uber-like service for long-haul trucking in the United States.

“Uber and Anthony are a good match. Both the trucking industry and Uber’s future business model depend heavily on efficient scheduling and coordination of supply and demand, so there are a lot of complementary technologies and applications at play here,” Smith said.

I would be surprised if by 2020 we did not have fully autonomous vehicles available.
— Nidhi Kalra, senior information scientist, RAND Corporation

Unlike Google, Tesla, and traditional carmakers, Uber does not plan to produce its own autonomous vehicles. Its objective is to develop its own self-driving technology and team up with carmakers.

Other Silicon Valley companies, however, have been developing their own self-driving cars. Google announced it plans to have its driverless cars on the market no later than 2018. Tesla says the first fully autonomous Teslas will be ready by 2018.

Major carmakers also announced they would launch fully autonomous cars by 2020 or 2021. Some states are introducing legislation to speed the testing and development of self-driving cars on public roads.

“I would be surprised if by 2020 we did not have fully autonomous vehicles available,” said Kalra.

“Uber just joined this party. However, it is in every major city in the country and in many cities around the world. So once Uber gets its technology ready, they can deploy it in scale,” Kalra says.

According to her, Google and others do not have Uber’s advantages, although it did start the race a bit late.