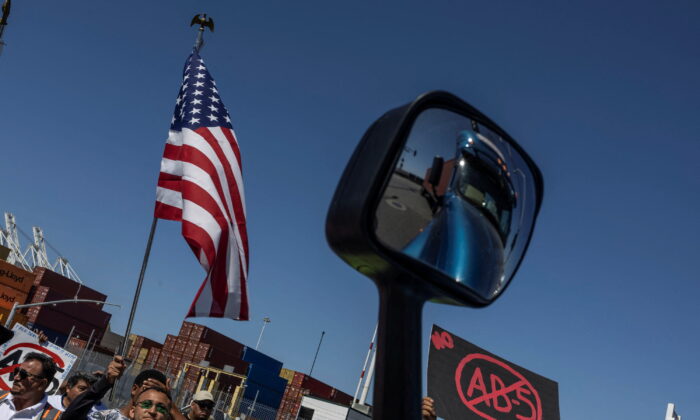 Independent truck drivers gather to delay the entry of trucks at a container terminal at the Port of Oakland, during a protest against California's law known as AB5, in Oakland, Calif., on July 18, 2022. Carlos Barria/Reuters)
Viewpoints

Uber Drivers Get to Be Independent Contractors in California—So Why Shouldn’t Truck Drivers?

The Port of Oakland in California’s San Francisco Bay is America’s ninth-busiest container port, handling more than 2.4 million 20-foot shipping containers a year. All last week, though, its docks were piled high with unloaded containers, and an armada of freighters stacked with still more containers sat idling in the bay—thanks to a week-long strike by the state’s independent truckers who used their vehicles to block road access to the port.

Only on July 26, after a week in which the port effectively shut down, did the 1,000 or so truckers involved lift their blockade—partly because they were under threat of being arrested and having their rigs impounded.

The protesters, who represent some of California’s 70,000 independent owner-operators who use their own tractor-trailers to haul freight, remain enraged, however—and for good reason. The source of their fury is a 2019 state law known as Assembly Bill 5, a typical product of California’s ultra-progressive state legislature that’s forcing the trucking companies that engage their services to treat them as salaried employees, which neither the industry nor many independent truckers want.

The law wasn’t even originally aimed at the trucking industry. Its target was the Big Tech gig economy: the Uber and DoorDash drivers who often work full time but complain that they don’t have the health and unemployment insurance benefits of actual full-time employees. But Big Tech spent $200 million in 2020 to weasel out of AB5’s purview via a ballot measure that carved out a specific exemption for app-based workers. So now the independent truckers are left holding the bag—a bag of employee protections they say they never wanted and don’t want now.

Here’s what happened: Most truck owner-operators sign up with a carrier—a trucking company—in order to get consistent work and have their paperwork taken care of. Those arrangements treat them as independent contractors responsible for their own expenses: gas, truck payments and repairs, meals and lodging on the road. It was an arrangement that was legal for decades in California, as it still is in many other states, because of a complex test that the California courts used for distinguishing independent contractors from employees. One of the test’s deciding factors was whether the people involved could control their workload and set their own hours—which was definitely the case for independent truckers.

In 2018, however, the California Supreme Court issued a decision drastically limiting the definition of an independent contractor. The contractors had to be engaged in a different line of business from that of the entity that used their services, for example. The ruling would reclassify numerous categories of people who had once worked as independent contractors, from manicurists to architects and engineers—and, of course, independent truckers—as employees of the entities that used their services.

The next year, 2019, the California Legislature turned the state Supreme Court ruling into statutory law with AB5. Not without a fight, however. As the bill wound its way through the legislative process, and was amended in a 2020 piece of cleanup legislation, lobbyists for an ever-enlarging collection of employment categories won either complete or partial exemptions from AB5’s sweeping mandate. It was a nearly endless laundry list: lawyers, accountants, travel agents, musicians, freelance writers and photographers, human-resources administrators, even commercial fishermen.

The app-based gig workers originally targeted for protection were still subject to the law—but Uber, Lyft, DoorDash, and a handful of other Bay Area tech satrapies collected a war chest and persuaded California voters in November 2020 to give their drivers exemptions as well, subject to certain conditions such as making health benefits available.

Independent truckers had no such luck. In 2020 the California Trucking Association, a trade organization of trucking companies, joined by two independent owner-operators, sued in federal district court and obtained an injunction against enforcement of AB5 under the Federal Aviation Administration Authorization Act of 1994, which preempts any state regulation of the “price, route, or service of any motor carrier.” But the Ninth U.S. Circuit Court of Appeals reversed that decision in 2021, holding that AB5 was simply a general labor law that didn’t affect prices, routes, or services. On June 30, 2022, the last day of its 2021–2022 term, the U.S. Supreme Court declined to hear the California Trucking Association’s appeal.

The protesting Oakland truckers, their rigs now confined to a “free speech zone” at the docks, are in a tough place, essentially at the mercy of a hitherto unsympathetic Gov. Gavin Newsom, who signed AB5 into law in 2019 and has already indicated he has no plans to delay its enforcement in the trucking industry. Newsom, in political trouble last year over his draconian handling of the COVID-19 pandemic, survived a recall vote in September partly through massive get-out-the-vote campaigns by labor unions, which were also a driving force behind AB5. More people classified as employees mean more candidates for unionization.

Independent owner-operators, who constitute about 10 percent of America’s 3.5 million trucking force, are already in a hard place. They gross on average nearly $200,000 a year—but expenses eat up about 70 percent of that, at the cost of grueling hours. In California, thanks to stiff “clean truck” anti-pollution laws that render most rigs illegal to drive after a few years, increasing numbers of truckers are on “lease to own” arrangements with the trucking companies that aren’t much different from employment. Still, as the protest has shown, many of them treasure their independence, precarious as it is.

To keep that independence, many California owner-operators are likely to move out of state, adding another snarl to the state’s already disruption-plagued supply chain. What they deserve right now is fair treatment. If lawyers, writers, manicurists, and Uber drivers can get exemptions from a law because lobbyists were in the right place at the right time, there’s no just reason why the hard-working drivers who move all of Americans’ goods shouldn’t have an exemption, too.