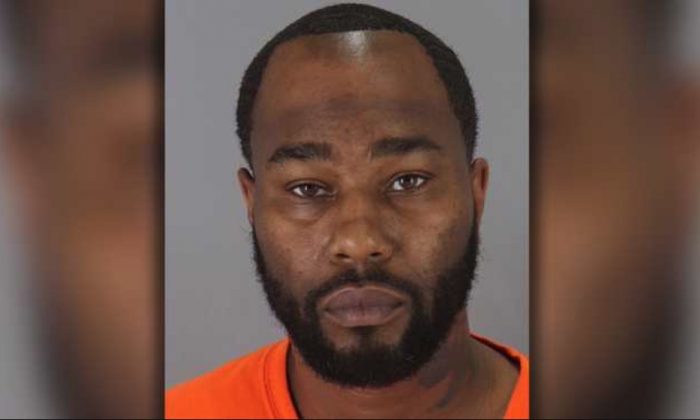 A ride-share driver has been arrested on suspicion of burglarizing a house in Sacramento shortly after dropping a customer off at the airport.

Jackie Gordon Wilson, 38, was working as an Uber driver when he dropped customers off at the airport on April 4, according to police.

Wilson was recorded by surveillance cameras returning to the customer’s home about an hour later in an apparent attempt to burglarize the residence.

Police said an alarm scared Wilson off and so instead he broke into a nearby house.

San Mateo Police Department officials said Wilson returned to a residence on Rand Street in San Mateo after driving the unidentified homeowner to catch a flight.

“The Rand Street Ring security camera showed Wilson attempting to burglarize the very home of his rider’s an hour after dropping them off at the airport,” police said in a statement.

Footage from the security camera shows a man alleged to be Wilson lurking at the front door of the home, seeming to put gloves on.

The video shows him moments later walking away from the home with a brisk step.

“His attempt to burglarize the Rand Street home was thwarted after an alarm sounded,” police said.

Officials said Wilson then went to another home “only a few blocks apart” and broke in.

Deputies responding to a residential burglary call at a home in the 1700 block of Nash Drive in San Mateo found that the house had been “completely ransacked, and multiple items were found to be stolen.”

The Nash Drive home also had a Ring security camera system installed, police said, and the owners shared footage of the break-in on the platform.

The homeowner then “quickly learned from platform users that the suspect was an Uber driver and just dropped off residents at the airport from the 600 block of Rand Street.”

Investigators eventually identified the suspect and linked him to a home in Rancho Cordova.

Wilson was arrested at his home without incident.

When San Mateo Police Department officers, assisted by Sacramento County Sheriff’s Office deputies, took Wilson into custody, he “was wearing the same clothing he had on while lurking around our quiet San Mateo neighborhood the day before.”

Police recovered some stolen items and said they were investigating possible links between Wilson and other crimes.

Wilson was booked into the San Mateo County Jail for burglary and attempted burglary.

“We removed the driver’s access to the app as soon as we were made aware of the allegations and stand ready to assist police in their investigation,” Uber said in a statement, according to KCRA.

“Be mindful where you are picked up and dropped off,” police warned. “For example, if you use ride-share to the airport, the driver will know you won’t be home for several days.”

Police also urged riders to “double-check your ride-share app to ensure the license plate, make, model, and color of the car is the actual car assigned to you by the app.”

Riders should also take a picture of the license plate and vehicle, police advised.

“Do not get into a car or give your name to the driver until you ask, “who are you here for?” If the driver can’t identify your name, do not get in,” police said.

In a recent incident, University of South Carolina student Samantha Josephson got into a car she thought was her Uber ride and ended up murdered.

Student killed after getting into car she thought was her Uber. https://t.co/a6za3AbfR9 pic.twitter.com/9z79abpTaD

Police also said, “Trust your instincts! If you are uncomfortable with the driver’s behavior or comments or you sense something is not right, don’t get in the car. If you are already in the car, ask to be dropped off and call 911.”