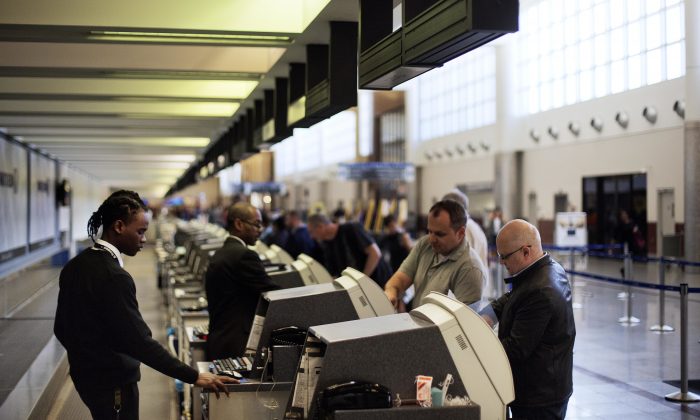 In this March 10, 2016 file photo, passengers check-in at the North terminal of the domestic passenger terminal at Hartsfield-Jackson Atlanta International Airport in Atlanta. Officials at Hartsfield-Jackson Atlanta International Airport this month said they were moving toward allowing Uber and other ride-sharing services, a reversal of a ban on such services from curbside pickup. (AP Photo/David Goldman)
US

ATLANTA—Atlanta’s airport—the world’s busiest—is insisting that Uber drivers get fingerprint-based background checks to pick up passengers, but the ride-sharing service is balking at the proposed rule.

The contentious issue looms before a March 30 meeting involving the Atlanta City Council, which must approve the proposed agreement between the airport and ride-sharing firms.

It also comes a few weeks after police say Uber driver Jason Dalton opened fire on people between picking up fares, killing six and wounding two others in Kalamazoo, Michigan, on Feb. 30.

Officials at Hartsfield-Jackson Atlanta International Airport this month said they are moving toward allowing Uber and other ride-sharing services—a reversal of a ban on such services from curbside pickup.

Uber objects to the requirements, which would add “substantial, additional bureaucratic barriers for drivers,” company spokesman Bill Gibbons said in an interview Friday.

Furthermore, it would not be possible for Uber to provide reliable and efficient service at Atlanta’s airport under the proposal, the company said in a statement.

Such a requirement “gives everybody confidence in the system,” Southwell said, adding that “it really should be a welcome part of the process.”

Uber has had trouble getting into some airports, a last fortress for taxis and one they have jealously guarded. The taxi lobby succeeded in keeping them out of Los Angeles International Airport until January, and—unlike taxis—the cars there must wait off-site to be summoned.

Michigan Shooter Says Uber Made Him Do it, Sues for $10 Million

In Atlanta, Uber said that if the airport agreement is implemented as proposed, “it would be impossible for Uber to continue providing the safe, reliable and efficient transportation options that travelers have come to expect and demand from a world-class airport like Hartsfield-Jackson,” the company said in the statement.

Among them is Denver International Airport, which allows regular Uber drivers to drop off and pick up passengers in the same public areas where family members and friends pick up passengers, airport spokesman Heath Montgomery said.