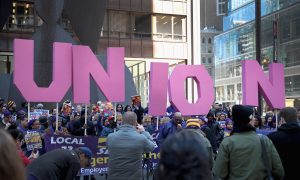 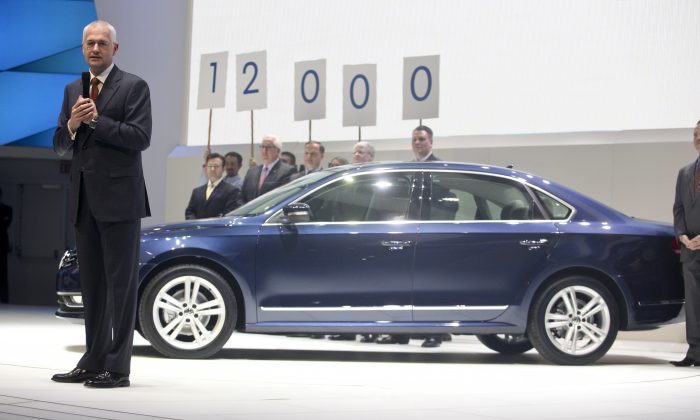 Jonathan Browning, then-CEO of Volkswagen Group of America, introduces the company's new Passat at the North American International Auto Show in Detroit, on Jan. 10, 2011. The Passat has been built in Chattanooga, Tenn., creating 12,000 jobs, according to Volkswagen. GEOFF ROBINS/AFP/Getty Images
US News

United Auto Workers (UAW) officials will appeal to Congress to change the nation’s labor laws after workers at a Volkswagen assembly plant in Tennessee voted for a second time against joining the storied union.

In results that are pending certification by the National Labor Relations Board (NLRB), Volkswagen (VW) maintenance and production employees rejected the petition to organize and join the UAW, 833 to 776. Ninety-three percent of eligible VW employees voted, according to VW.

The margin of victory for the anti-union workers was slightly smaller than the 712–626 first vote on the issue in 2014. The union narrowly won a 2015 vote by the maintenance workers, but VW officials insisted on a vote by the full workforce, and the NLRB agreed.

Had the UAW won the vote, the VW plant would have become the union’s first organized foreign-owned auto production facility in the southern U.S. states. The only UAW auto plant in the South now is General Motors’ Spring Hill, Tennessee, facility.

All the rest of VW’s worldwide non-management workforce is unionized. The 3,800 employees at the Chattanooga plant produce VW’s Passat family sedan and Atlas sport-utility vehicle.

Union spokesman Brian Rothenberg issued a statement after the vote late on June 14, saying: “VW workers endured a system where even when they voted, the company refused to bargain. Clearly, Volkswagen was able to delay bargaining with maintenance and, ultimately, this vote among all production and maintenance workers through legal games until they could undermine the vote.

“Our labor laws are broken. Workers should not have to endure threats and intimidation in order to obtain the right to collectively bargain. The law doesn’t serve workers, it caters to clever lawyers who are able to manipulate the NLRB process,” Rothenberg said.

Rothenberg was referring to the more than three years that elapsed after the December 2015 vote. The union appealed when VW officials refused to recognize the result as creating a “micro-union” with 168 members.

Rather than pursuing what would have been a lengthy and expensive administrative adjudication process at NLRB, the UAW dropped its appeal in return for the June 14 vote.

In a June 17 interview with The Epoch Times, Rothenberg said union officials are pushing for passage of H.R. 2474, the Protecting the Right to Organize Act of 2019. House Education and Labor Committee Chairman Bobby Scott (D-Va.) introduced the bill that is in the draft stage.

“Among other things, what it does is it prevents companies from playing some of these legal games. It prevents these captive audience meetings by Volkswagen, where they forced everybody in the plant to attend,” Rothenberg told The Epoch Times. “And it gives fairness and it gives an assist to workers rights to make a decision, not outside money, not corporate money and not lawyers playing games.”

Rothenberg said the NLRB, during the Obama administration, had recognized the smaller union from the 2015 vote, but “when the Trump appointees came in, they pulled the issue from the courts, saying they wanted to rule on the issue of the micro-unions, but then nothing ever happened.”

Sen. Lamar Alexander (R-Tenn.), the state’s senior senator, told the Chattanooga Times-Free Press that “this sends a signal across the Southeast that the UAW is probably going to have a difficult time organizing any of these plants.”

Alexander, noting that Tennessee is a right-to-work state that protects employees’ right to choose not to join a union as a condition of employment, said he thinks the VW “looked at our state and they saw Nissan, which has done well without a union and, in fact, has created the most efficient auto plant in North America.”

Alexander was referring to the Smyrna, Tennessee, plant opened in 1983 by Nissan, which now produces five Nissan models and one Infiniti model. Nissan has a second plant at Decherd, Tennessee. Neither plant is unionized.

Sen. Marsha Blackburn (R-Tenn.) tweeted on June 15 that the Chattanooga VW workers “know we don’t need the @UAW to come from Detroit and tell Tennessee workers and employers what to do here.”

Rep. Chuck Fleischmann (R-Tenn.), whose district includes the plant, said in a statement that he was “pleased that workers at the Volkswagen plant voted to preserve their ability to deal directly with their employer.”

Fleischmann pointed to what he called the UAW’s “track record of failure in Detroit” as the basis of his opposition to the union’s efforts to organize the VW plant.

Fleischmann also said that “after this third failed attempt to unionize, this issue will not rise again, and Tennessee can continue to use its status as a right-to-work state to be an economic leader in the region and across the nation.”