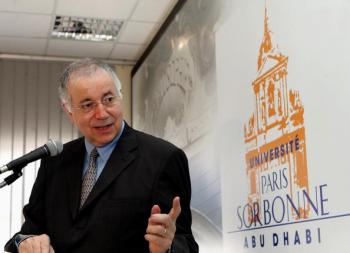 President of Paris-Sorbonne University Jean-Robert Pitte speaks during the opening ceremony of the prestigious university's branch in Abu Dhabi, October 2006. The Abu Dhabi-Sorbonne is the first project of its kind in the Middle East. (STR/AFP/Getty Images)
Middle East

By Stephen Jones
biggersmaller
Print
DUBAI—Attempts to get western professionals to join the rapidly expanding academic sector in the United Arab Emirates (UAE) could be hamstrung by the increasing cost of living.

In the past, the UAE has undergone rapid expansion in a variety of industries by relying on western expatriates flocking to enjoy the lucrative tax-free salaries on offer.

However new education developments such as Dubai’s “Knowledge Village” could be undermined by the rising housing rents in the emirate, which have done much to deter new expatriates.

Professor Ashly Pinnington, dean of the facility of business at the British University in Dubai (BUiD), which is based in Knowledge Village, told the English-language newspaper The National: “I’ve had direct experience of a number of high-calibre academics, some of who actually come from the Gulf region but are working in the UK or the U.S. or Australia, people we wanted to recruit, and the overall package has been perceived as not favourable.

“They can very quickly ask friends or go on the web and find that [the cost of] a one-bedroom or two-bedroom flat is much higher than they would pay in their home country.

“It makes it much more difficult to attract the people we want here. It’s a real problem. We have made offers to people. Some have come and some haven’t.”

Rents in Dubai have surged 22% over the last year while those in Abu Dhabi have risen by 49%. The increases come on the back of heavy rises in previous years.

Average prices for a modest one-bedroom apartment in a middle-range area of Dubai currently stand at around US$1300-1900 a month.

In addition, only married couples and families may live together in the same house and sub-letting is illegal. In the majority of properties, rent has to be paid by the year rather than the month and large-sized loans are common to most expatriates.

To combat this, a number of employers have offered housing allowances to their staff, but these are rarely ring-fenced and if the rent exceeds the allowance, individuals must pay the extra from their salaries.

These problems could be compounded owing to the scale of development planned for the education sector in the UAE.

Moreover, with student admission up by a quarter this year, state-owned federal universities are also expected to take on more staff.