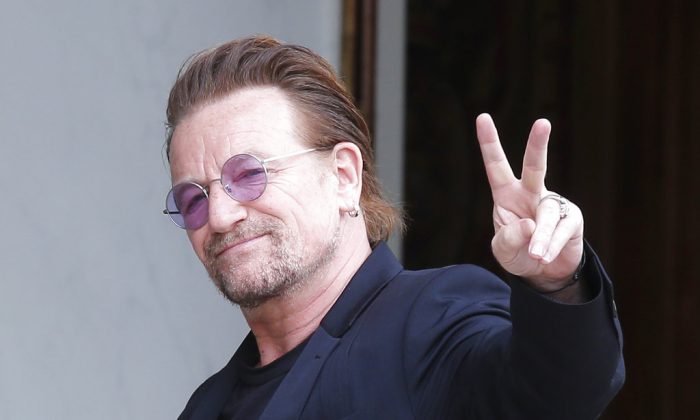 U2 singer Bono makes a peace sign as he arrives for a meeting at the Elysee Palace, in Paris, France on July 24, 2017. (AP/Michel Euler/ file)
Entertainment News

BERLIN—U2 lead singer Bono is reassuring fans that he’ll have his voice back for the rest of U2’s European tour after ending a concert in Germany on Sep. 1, which they are rescheduling.

In a statement posted Sep. 2 to U2’s website, Bono says that a doctor has ruled out anything serious related to his loss of voice during the performance in Berlin. He says his relief is tempered by the knowledge that he Berlin audience was inconvenienced, adding that he can’t wait to get back there on Nov. 13 for a rescheduled show.

Bono suffered a “complete loss of voice” at the band’s Sep. 1 night show at Berlin’s Mercedes-Benz Arena, causing the engagement to end early. The 58-year-old frontman made it through the U2 hit “Beautiful Day” with the help of the audience, German news agency dpa reported Sep. 2.

Concertgoers first were told there would be a short break and eventually were informed the show was over, dpa said. They were advised to keep their tickets for a replacement performance.

U2 opened the European segment of its 2018 “Experience + Innocence” tour in Berlin on Aug. 31. It has a sold-out show scheduled in Cologne on Sep. 4 and a second concert in the German city on Sep. 5 before back-to-back performances in Paris on Sep. 1 and 2.

A note on U2’s website said ticketholders should expect more information from Live Nation regarding the rescheduled Berlin show on Sep. 3.